View source
watch 04:03
Wiki Targeted (Games)
Do you like this video?
Play Sound

Vashad is a Carja farmer turned Snapmaw hunter. He borrowed metal shards to buy seeds for his farm, but the harvest did not turn a profit. Knowing that if he could not come up with the shards to pay his debt he would lose his farm and everything he owned, he paired up with a number of Carja hunters, including Omas, and turned to hunting Snapmaws for Snapmaw Hearts in order to pay off his debt.

Unbeknownst to him, his hunting attracted flocks of Glinthawks that, as well as scavenging the Snapmaw carcasses, were also attacking Lone Light, a nearby Carja settlement.

The Lone Light villager Ilsadi asks the Hunters Lodge for help fending off the Glinthawks that have been attacking the town. Although the Sunhawk, Ahsis, refuses the hunt, the Hawk Talanah agrees and recruits Aloy to help. Aloy traces the source of the Glinthawk attacks to Vashad and asks him to stop hunting Snapmaws nearby. He refuses to leave until he has the machine parts. Aloy can either hunt the hearts for him, purchase hearts from the Machine Resources Merchant, or defeat Vashad, Omas, and their crew in battle. 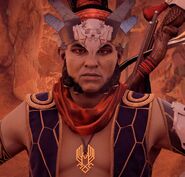