Elena Saurel (voice)
Vala is a minor character in Horizon Zero Dawn. She was a young Nora woman, the daughter of Sona, the tribe's War-Chief, and the sister of the Nora Brave Varl.

The daughter of the War-Chief Sona, Vala grew up competing with her older brother Varl for their mother's favor. In the year that the Nora Brave Aloy became an adult, Vala was one of the competitors who participated in the Proving, the tribe's rite of passage for its youth to become Braves. Aloy was also a participant in the Proving that year, and Vala befriended her, unlike the other participants, especially Bast, who incessantly taunted Aloy for being an Outcast. Indeed, she counted Aloy with herself and Bast as the participants most likely to finish the rite first.

Aloy finished first, and Vala was happy for her. However, just as Aloy was declared the winner, the assembled group was attacked by the Eclipse, a secret cult of another tribe, the Shadow Carja. Aloy counter-attacked while Vala and Bast directed the other participants to an escape route. But as they prepared to take the route themselves, an Eclipse cultist armed with a machine gun appeared and opened fire. Vala, caught out of cover, was shot to death.

Vala and Bast were remembered as heroes for sacrificing their lives to protect the other candidates. Aloy lamented that she and Vala would have been friends had the latter survived long enough for them to truly know each other. Vala was later avenged by her family and Aloy during the Nora's crusade against the killers. 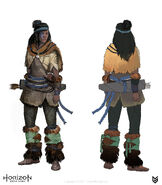 Concept art by Luc de Haan
Add a photo to this gallery
Retrieved from "https://horizon.fandom.com/wiki/Vala?oldid=45581"
Community content is available under CC-BY-SA unless otherwise noted.