Ullia is a warrior of the Tenakth tribe in Horizon Zero Dawn.

Upon first coming to the Sundom, Ullia joined a clan of jungle bandits before being captured and taken to Sunstone Rock. Due to her fierce and dangerous nature she was placed in an isolation cage. This did nothing to dull her ferocity, however, as she still tried to bite off the fingers of a fellow prisoner, Rasgrund.

Along with Rasgrund and Gavan, Ullia escaped Sunstone Rock after a machine lure crafted by Rasgrund caused a pair of Behemoths to attack the prison. She escaped to the nearby bandit camp, Blackwing Snag, until she was confronted by Aloy. Upon being defeated, Ullia admits that she would have taken the Nora as her own daughter, requesting her to drink of her blood so that the stories of her life may live on. 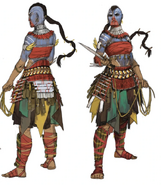