Horizon Wiki
Register
Don't have an account?
Sign In
Advertisement
in: Pages to be updated, Machines, Combat Class,
and 3 more
English

"That thing is huge; and built to fight."
―Aloy, upon sighting a Thunderjaw

The Thunderjaw is a machine in Horizon Zero Dawn and a returning machine in Horizon Forbidden West. It is a large Combat Class machine, one of the two largest machines of this class (the other machine being the Tremortusk). Its size, power, and array of heavily damaging weapons make it one of the most feared of all machines.

Unlike the Zero Dawn terraforming machines, which were designed and controlled by GAIA, the Thunderjaw was designed by the AI HEPHAESTUS, which had seized control of the Cauldron facilities and begun aggressive countermeasures to the human practice of machine hunting. Thunderjaws are one of the most extreme examples of HEPHAESTUS' escalating attempts to cull the human population, a phenomenon known to the tribes as the Derangement.

The Carja hunter Ahsis, a Hawk of the Hunters Lodge, is the first known hunter to have killed a Thunderjaw. After the huge machine destroyed the Carja freehold of Morning Light, Ahsis tracked, found and engaged it, narrowly defeating it by using its own Disc Launchers against it. As the largest and most powerful machine ever successfully hunted in the Lodge’s history up to that time, the kill elevated him to the rank of Sunhawk.[1] The body of this Thunderjaw was later retrieved, and is now kept on display in the center of the Lodge.

His achievement was eventually topped by the successful hunt of another Thunderjaw. Known as Redmaw, this Thunderjaw had for years slaughtered every hunter who had attempted to kill it, earning it legendary status among Carja hunters. Eventually, Redmaw was killed by Hawk Talanah Khane Padish and her Thrush Aloy.

HEPHAESTUS also produced Daemonic Thunderjaws, albeit sparingly. When Aloy and her companions, Aratak and Ourea, attempted to breach the Cauldron EPSILON facility, HEPHAESTUS deployed one to guard the entrance. In the end, however, it proved no match for them and was destroyed.

Alongside their regular variants, Aloy encountered exceptionally powerful Apex Thunderjaws in the Forbidden West, killing one at the entrance to Thebes.

During the final assault on the Far Zenith base, Beta managed to inject HEPHAESTUS into the Zenith printer matrix, allowing it to unleash an army of Thunderjaws and other large Combat machines that engaged a Specter swarm.

The Thunderjaw is a huge bipedal machine with features akin to those of a Tyrannosaurus Rex: powerful and bulky legs, a long body, and a heavy tail to maintain equilibrium. Its body features symmetrical weaponry: a laser weapon in its mouth, cannons on its jaws, a radar array on its back, and Disc Launchers on its hips.

Like most large machines, Thunderjaws are found alone. A pair can be found together protecting a herd of Lancehorns in the Glarebreak, west of Free Heap.

When undisturbed, Thunderjaws mill about their respective sites, their footfalls an early warning to anyone wandering too close. They are so massive that they can knock over trees just by walking into them.

The Thunderjaw’s huge size, power, array of weapons, and capacity to sustain damage make it one of the most formidable machines. It employs a variety of powerful melee and ranged attacks.

Additionally, its radar scanner allows quick detection of hunters hiding in tall grass. Unlike that of a Scrapper, which is able to detect only movement, the Thunderjaw’s radar can detect humans regardless of their motion. Thunderjaws have no elemental weaknesses, and are resistant to Shock.

A Thunderjaw's major structural weaknesses are its heart and data nexus; ranged weapon strikes on either cause significant damage once they are exposed. Similarly, landing a shot of the corresponding element on exposed Chillwater canisters, Blaze canisters, or power cells will induce their status effects.

Its mandibular cannons, disc launchers, tail and radar unit can all be removed with enough Tear damage, disabling their corresponding abilities entirely.

First and foremost, the player needs to remove the Disc Launchers. The flying laser disks it fires will pin Aloy down with heavy and accurate firepower, so Tearblast arrows from a Carja/Shadow Sharpshot Bow are a good start. Alternatively this can also be done using the Tearblaster, though it will require being closer. This can be quickly followed by grabbing the Disc Launcher for yourself and putting all 8 rounds into the Thunderjaw for decent, though likely not fatal, damage.

Another starting option is a set of Sticky Bombs from a Blast Sling while hiding. You should be able to land at least four of them on the Thunderjaw for good opening damage, but you should then immediately switch to removing the Disc Launchers as mentioned above.

Once in the thick of it, you need a good piece of cover that the Thunderjaw cannot destroy, like a large boulder. You will need cover from the various types of weapon fire it will send your way from its head, as it can simply destroy trees and small building walls. Be ready to dodge a charge and tail-sweep, keeping the boulder between you and it, and you should eventually be able to take it down.

As an alternate option, the Banuk Powershot Bow can snipe a Thunderjaw from outside its detection range.

In Horizon Forbidden West, there are two variants of the Thunderjaw.

Appearances in Other Media

A Thunderjaw in the game’s prologue cinematic.

A Thunderjaw in the power cell of Cauldron ZETA.

Thunderjaw that has been Overridden 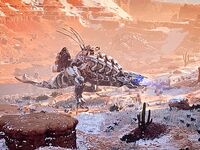 Close-up of a Thunderjaw's face