Teersa is a High Matriarch of the Nora tribe. She promoted Aloy to a Seeker so that she could find out what happened on the day of the Proving. A member of the High Matriarchs, she attempts to lead the Nora with compassionate wisdom, and is often at odds with Lansra.

Teersa is an old woman well into her old age. She appears to be of Caucasian descent. She has long grey hair in the style of braids. Her eyes appear to be blue. Her outfit consists of a long garb with a bag around her waist. She also has many accessories on her such as beads and bracelets. She also wears a headdress that appears to have metal components mixed with fabric. Teersa is short and has a small frame.

Acting as the primary form of government for the Nora in both political and religious matters, Teersa, Lansra, and Jezza attempt to lead their tribe through many situations, from following the customs of the All-Mother to war with the Mad Sun-King Jiran.

However, while heading inside All-Mother Mountain, they discovered a baby girl lying at the door. Believing that this child was of importance, Teersa tried to make the other Matriarchs understand, but Lansra did not see eye-to-eye on the matter, believing the baby to be a danger to the Nora, and therefore had the child given to the outcast Rost to look after.

Against the other Matriarch's wishes, Teersa discreetly had Rost bring the baby to the overlook of All-Mother's mountain to make the baby's name be accepted. Rost gave the name Aloy, which Teersa declared to be accepted, but they were soon both confronted by both Lansra and Jezza, who did not agree on the naming of the baby. They sent the child away, much to the disagreement of Teersa.

Teersa and Aloy did not meet again until the latter turned 18, and Teersa was overjoyed to see her again. However, she could only provide encouragement on the Proving, and sent Aloy to see a friend of hers. Subsequently, prior to the Blessing, Teersa addressed the Nora, introducing the envoys from Meridian seeking to restore trade relations. Later on, she, along with the rest of the tribe, was shocked to learn of the massacre of the candidates of the Proving, with only a few candidates, including Aloy, escaping the slaughter.

Against the wishes of Lansra, Teersa insisted Aloy recover inside All-Mother Mountain. After some rest, Teersa took her to the door to explain the circumstances Aloy's birth. When she stood in front of the door, a female voice and a bright red beam scanned Aloy, but did not allow her entrance due to corruption. Teersa interpreted this as meaning that Aloy should heal the world of corruption, and named the girl a Seeker to seek out the answer to the problem.

While maintaining order in the Nora tribe, the tribe was attacked by the Shadow Carja and corrupted machines. Fearing total annihilation, Teersa allowed the surviving tribe members into All-Mother Mountain, again defying Lansra, who could barely protest as the tribe scrambled past her into the mountain. She discussed with the matriarchs what to do, when Aloy returned with access to All-Mother, which both amazed and humbled those present, Teersa among them. Aloy explained that she has a purpose to defeat a Metal Demon, to which Teersa agreed and had the Nora Braves follow to stop this demon. Ultimately, they were victorious in defeating it.

Teersa is wise, compassionate, and accepting. She is unafraid to act against the other Matriarchs' wishes if she feels it is right, such as when she blesses Aloy's name and later appoints her a Seeker. She often clashes with Lansra because of her tolerance of outcasts and former outcasts and her willingness to break tradition. She shows great caring for Aloy and treats her much like a granddaughter, personally making her the lantern to use in the Blessing (which is usually the mother's task).

While Teersa is devout in her belief in All-Mother, she is willing to accept that there are things beyond her understanding, as shown when Aloy pointed out the similarities between All-Mother's mountain and the ruins of the Metal World. This shows that Teersa, as is characteristic of her flexible nature, is willing to listen and even reshape her beliefs based on what is discovered by those she trusts, such as Aloy. For matters she is unable to understand, she is very trusting of those of great character, such as Aloy and Rost, to handle such issues.

Because she is a High Matriarch, it is assumed that Teersa has living children, grandchildren, and great-grandchildren. 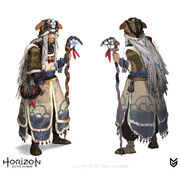