This article is a stub. You can help the Horizon Wiki by expanding it.

"Its wings look like it can catch the sunlight. Probably a fast flier, too."
―Aloy, spotting a Sunwing

The Sunwing is a machine in Horizon Forbidden West. As an Acquisition class machine, its job is to locate perches at high altitudes and roost there, absorbing as much solar energy as possible during the course of the day.

The Sunwing resembles a pterosaur in form, with a retractable fin used for plasma attacks located on its head, mimicking the distinctive crest of these long extinct creatures. Its arms hold the majority of its defensive/acquisition equipment, with two shields situated at the bend in their joints and a thin conductive-mesh knitted to the body and the arms, acting both as wings and solar collection panels. It possesses a resource canister in its chest for storing collected materials and two Sparkers on its hips which, presumably, store collected solar energy. It also possesses a small tail, with a white tip and two small solar collection weaves.

Sunwings possess photovoltaic wings which they use to collect and store energy. They can be found patrolling the skies of the Forbidden West, frequently hovering at great heights or roosting on tall mountain peaks to absorb as much solar energy as possible. Sunwings are particularly fast and agile in the air.[1][2]

The Sunwing is able to use Plasma attacks from its fin, and it can raise the defensive shields on its shoulders to protect itself from head-on attacks. It is a fast flyer and capable of striking quickly from the air. However, it needs to recharge every so often after attacking, which it can only do by aligning its solar wings to the sun. After Cauldron GEMINI, Aloy can override and ride on a Sunwing. It is its own individual mount, meaning a ground based mount can be used without losing the Sunwing.

Sunwings are weak to Purgewater, and inflicting the Drenched state will hamper most of their attacks if not outright disable them. 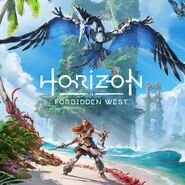 Sunwing on a snow covered mountain