"A Strider. One of the weaker machines. But even a weak machine can kill a hunter -- if she is careless."
―Rost, showing Aloy a Strider for the first time

The Strider is a machine in Horizon Zero Dawn. It is a small Acquisition Class machine, equine in appearance and behavior. A human equipped with the necessary technology can utilize a Strider as mounted transport.

Striders were designed by the AI GAIA as part of the terraforming process that was the first step in restoring life to the planet after its eradication by the Faro Plague. Originally Striders were docile, posing no threat to humans. However humans began to hunt terraforming machines for parts and resources. In response, HEPHAESTUS, the artificial intelligence that manufactured and managed them, altered their behavior from docility to increasing hostility.

A Strider was the first machine kill made by the the Nora huntress Aloy as a child, under the guidance of her guardian Rost. As an adult, she discovered that ancient machines known as Corruptors possessed a component that allowed them to control any contemporary machine, in the sense that the machine fought alongside the Corruptor in battle. She was able to harness this component to override any specific herding terraforming unit such as a Strider, Broadhead or Charger. This made the unit docile toward her to the point of being able to ride it as transport. This skill was observed and copied by the wandering maverick researcher Sylens.

About the size of a common draft horse, the chassis of a Strider is very equine in appearance, very closely resembling the body of a heavy-built draft horse. It stands on four equine legs with hooves, and has powerful shoulders. The bulk of the chassis is composed of synthetic muscle, with white armor plating over the head, shoulders and legs. A vertical dual optical sensor array is on the tip of the snout.  Between the haunches is a Blaze canister. The Strider seems to share a nearly identical chassis design with the Broadhead and Charger, with its main difference being the head design.

Striders are invariably found in herds grazing quietly, converting the grass they ingest into Blaze. For protection against threats such as hunters, they are accompanied by recon machines such as Watchers and Longlegs, or combat machines such as Sawtooths or Ravagers. Striders are quite skittish, fleeing at the sudden appearance of a human, at any sudden loud noise, or at the alert call of a Watcher. However if a human is very close to the herd, the nearest Striders will attack the human instead of fleeing.

On encountering a perceived threat, Striders are capable of charging at high speed with head lowered to ram the enemy. Additionally they employ a variety of kicks like the horses they resemble. However if a Strider is overridden and used as a mount, these same kick attacks become weapons that can be employed by the rider against hostile machines or humans. 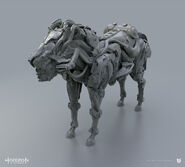 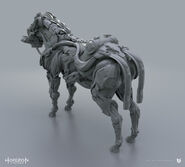