View source
watch 03:01
Wiki Targeted (Games)
Do you like this video?
Play Sound

The icon for every stranded item is the silhouette of Kojima Productions' mascot and logo, Ludens. If all three items are obtained, they can be traded to the Mystery Boxes Merchant in Meridian for a Mysterious Box.

There are three items in total.

The Stranded Figure collectable can be found in the ELEUTHIA facility, during and after the main quest The Heart of the Nora.

Its description reads: "This mysterious item is valuable only to the most curious merchants. A battered idol of an infant, smelling faintly of decay." It is found directly underneath the first stairwell you step on.

This item is based on a BB doll from Death Stranding.

The Stranded Shackles collectable can be found near the Zero Dawn Alternate Entrance, during and after the main quest Deep Secrets of the Earth.

Its description reads: "This mysterious item is valuable only to the most curious merchants. Shackles made from an unknown, smooth material."

This item is based on the cuff links from Death Stranding.

The Stranded Necklace collectable can be found in The Grave-Hoard.

Its description reads: "This mysterious item is valuable only to the most curious merchants. Six tarnished metal ingots threaded with a plain wire." It is found behind the sign on the left on the dead soldier to the left.

This item is based on the Q-pid from Death Stranding. 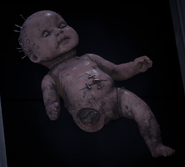