watch 03:41
Wiki Targeted (Games)
Do you like this video?
Play Sound

Adjoa Andoh (voice)
Jen Morillo (model)
Sona is the War-Chief of the Nora tribe in Horizon Zero Dawn. She commands the entire force of Nora Braves, leads them in battle, and formulates their military strategies. She performs these duties with indomitable will and severe seriousness, her utmost priority always being the security of the Nora Sacred Lands and the Nora people.

At some point, Sona had an unnamed mate, with whom she had two children: Varl and Vala. Presumably, she was widowed during the years before the Nora Brave Aloy became an adult. Her children followed in her footsteps; Varl became a Brave under her command, and Vala had embarked on the same path before events that threatened the tribe took her life. Due to her age, it may be presumed that Sona fought against the Carja when they attacked the Nora for human sacrifice victims, known as the Red Raids.

The year that Aloy became a Brave, members of a secret cult of a splinter tribe from the Carja, known as the Eclipse, attacked the Proving, the tribe’s rite of passage for of-age Nora youth to become Braves. The attack, known as the Proving Massacre, killed many of the participants, including Sona’s daughter Vala. Unshakably determined that the killers would be made to pay in blood for the attack, Sona pursued them with a large contingent of Braves.

The contingent tracked the killers down. However, many of the Braves, allowing their anger to cloud their judgment, went ahead of the force, and were decimated on arrival at the Eclipse’ location. In addition to the element of surprise, the cultists also had ancient Machines that came to be known as Corruptors in their service. These Machines used a phenomenon called Corruption to make other Machines much more aggressive and resistant to damage, and bound them in service to the Eclipse. The Braves who went ahead into the camp were either killed or severely injured, greatly weakening the contingent.

Sona continued pursuit with the remaining Braves, sending the injured back to The Embrace, the tribe’s capital region. The force made camp near the Old Ones ruin known as Devil’s Thirst. There, they re-acquired the killers’ trail, tracking them to a small dig site not far from the camp. While scouting the area with a small unit of Braves, Sona encountered Aloy, a Nora Brave and former Outcast who had singlehandedly fought and killed many of the killers at the Proving Massacre. Aloy had been made a Seeker, tasked with the mission of tracking the Eclipse to their origin in Carja territory, known as the Sundom. She had been asked by Sona’s son Varl, himself a Brave, to find her. Recognizing that Aloy, as a Seeker, was not under her command even though she was a Brave, Sona proposed to work with her in their planned attack on the Eclipse Aloy, who had seen her guardian killed by the killers’ leader during the attack, agreed. Together, they coordinated and led a successful attack on the dig site, killing all the Eclipse soldiers who were present.

However, Sona realized that the killers present at the site were but a fraction of those who had attacked the Proving. Aloy investigated the site and found a lead revealing the killers’ main location, at an Old Ones ruin known as Devil’s Grief, specifically in a structure in the ruins known as the Ring of Metal. Furthermore, the lead suggested a method of successful surprise attack. But the location gave Sona pause, despite her determination, as Old Ones ruins were considered taboo. However, Varl arrived, having gotten Sona’s location from a surviving Brave that Aloy had spoken to at the place where the pursuing Braves had been decimated. Aloy and Varl persuade Sona to break the taboo for the purpose of righteous retaliation for the attack by the Eclipse on their people. Sona, Varl, and the rest of the force then departed for Devil’s Grief, with Aloy agreeing to meet them there.

The force made camp at a location near Devil’s Grief known as Red Echoes. Aloy arrived and offered to clear out three outposts the killers had set up, in order to prevent warning of their presence from reaching the ruin. Sona agreed, sending a unit of Braves along with her to assist. As Aloy and the Braves departed, Sona rallied the remaining Braves in a pre-battle speech.

The Ring of Metal

Aloy and the unit succeeded in clearing the outposts, and met up with the force just outside Devil’s Grief. The killers outnumbered the force, and also had Corrupted Machines. But Aloy proposed to infiltrate the Ring of Metal and use the information she obtained in the lead she got at the killers’ dig site at Devil’s Thirst: a store of Blaze that, once ignited, would blow a hole the ring’s outer wall large enough for the entire force to pour through, taking the killers by complete surprise. Sona agreed, ordering Varl to go with her. Aloy and Varl successfully infiltrated the Ring of Metal and located the Blaze store. Varl returned to the force while Aloy made her way to the store and ignited it. As intended, the Blaze blew a hole in the ruin’s outer wall, leaving the killers in surprised disarray. Sona and the force stormed through into the ruin, killed all the killers and Corrupted Machines, with Aloy fighting alongside them. After the battle, Sona complemented Aloy for her skill and bravery, and wished her success on her quest, after which she and the force went to the Nora fort Mother's Crown.

At Mother’s Crown, Sona oversaw the improvement of the fort’s defenses. However, she had a problem in that certain resources were needed, namely Chillwater and the lens of a Lancehorn. Furthermore, she needed a cache of signal arrows to be delivered to a watchtower to the south. The solution presented itself in the form of Aloy, who was passing through on her way to the Carja Sundom. Sona asked Aloy to acquire the resources and deliver the arrows. Aloy did so, again earning Sona’s respect and gratitude.

Much later, Sona again led the defense of the tribe against the Eclipse. This time, however, the Eclipse came intending to exterminate the Nora and raze the Sacred Lands to the ground. Furthermore, in addition to Corruptors, they were accompanied by even more dangerous ancient Machines: Deathbringers, as well as by a corrupted unit of the most feared of all Machines: the Thunderjaw. The cult concentrated its attack on The Embrace, the tribe’s most heavily populated region. With their numbers greatly weakened due to the Eclipse’s previous attack, the Braves were unable to prevent the cult from invading and devastating the region. The population took refuge at the most defensible position: inside their Sacred Mountain. Sona and the Braves were forced to take refuge as well, as the cultists had the Corrupted Thunderjaw bombard the mountain with its Disc Launchers.

However, as with the Eclipse’s previous attack, the intervention of Aloy brought forth victory from the jaws of defeat. Having learned about the invasion from Helis, leader of the Eclipse, Aloy returned to the Sacred Lands to intervene after escaping from Helis. She fought her way to the sacred mountain and engaged the Thunderjaw. Seeing this, Sona immediately led the Braves out to her side to assist her. While Sona and the Braves killed the cultists, Aloy overcame and killed the Thunderjaw.

After the battle, Sona testified of Aloy’s singlehanded lifting of the siege to the tribes leaders, the High Matriarchs. She then watched along with the Matriarchs and the gathered tribespeople as Aloy entered what they believed to be the chamber of their goddess, All-Mother. When Aloy came out of the chamber some time later, Sona, along with the Matriarchs and the rest of the tribespeople, fell to her knees and worshiped her, believing her to be anointed by All-Mother. Aloy, however, angrily lifted her and others to their feet. Declaring that she was not to be worshiped, Aloy told Sona and the gathering that there was was a great, wide world beyond their borders, and that it and all its tribes, including the Nora, stood on the brink of destruction due to a threat whose nature she had uncovered in her Seeker’s quest. When Varl asked Aloy how the Nora could help, Aloy asked for all able-bodied fighters to go to the Carja capital Meridian, where the battle would occur. Sona agreed to lead a war party of Braves to the city.

Sona led a war party to Meridian as promised, part of an multi-tribal alliance assembled by Aloy. Speaking with Aloy after arriving, Sona expressed great discomfort at being there. However, she was firm in her resolve to fight against the threat to the Nora and the world that Aloy had outlined, though she and the others in the war party could not conceive of such a thing. The battle indeed ensued sometime later, and the alliance prevailed.

If the Hunter's Lodge side quests are not completed before The Face of Extinction, Sona will be one of three hunters to join Aloy in the final battle. If they have been completed, Sona will be found near the summit of the Alight, alive but too wounded to fight: her place will be taken by Talanah. While her current status is unknown, it is presumed that Sona survived the battle against the threat to the world.

Sona is extremely serious and driven. She takes her responsibilities as War-Chief with the utmost seriousness. She is a highly experienced and capable warrior and leader, and has the full respect of the Braves and the tribe in general.

Sona is deeply religious. She strongly adheres the tribe’s religion, such as with regard to the taboo against entering ruins of the Old Ones. However, should the situation be justified, such as in the pursuit of retaliation for an attack against the tribe, she can be persuaded to break taboo to pursue the attackers into these ruins. 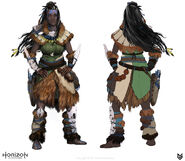 Sona in the Ring of Metal

Eyes
Add a photo to this gallery
Retrieved from "https://horizon.fandom.com/wiki/Sona?oldid=47957"
Community content is available under CC-BY-SA unless otherwise noted.