"Look at the jaws on that thing. It could snap a Sawtooth right in half."
―Aloy, upon sighting a Snapmaw

The Snapmaw is a machine in Horizon Zero Dawn and a returning machine in Horizon Forbidden West. It is a medium-sized Acquisition Class machine, and the only machine known to be amphibious until Horizon Forbidden West .[1] They were originally created as docile water purifiers as part of Zero Dawn. However, as a consequence of the Derangement, they have become a lethal danger to humans who pass within their sight at any body of water in which they are found.

Snapmaws were designed by Zero Dawn’s governing AI GAIA and manufactured by GAIA’s subordinate function responsible for machine manufacture, HEPHAESTUS. They were supposed to work under POSEIDON, the subordinate function responsible for detoxifying Earth’s poisoned rivers, lakes and seas. These had been ravaged to sterility when the Faro Plague destroyed the biosphere and thus exterminated all life in the mid 21st century. However, subsequent events led GAIA’s self-destruction and all of the subordinate functions becoming true AIs. Hostile to humans for hunting machines, HEPHAESTUS seized control of at least four of Zero Dawn’s machine manufacturing cauldrons, including RHO, the cauldron that made Snapmaws. To dissuade hunters, it weaponized Snapmaws and other machines, making them combat-ready, and also made them hostile to humans, attacking them on sight. This is the phenomenon that the tribes call the Derangement.

The Nora huntress Aloy first encountered Snapmaws at a lake in the region known as Valleymeet. They had trapped a Carja soldier named Lakhir, commander of a unit from the Daytower garrison, on an island in the middle of the lake. She killed the Snapmaws, allowing Lakhir to leave the island and return to Daytower.

During her subsequent journeys throughout the Carja Sundom and environs, she saw Snapmaws at various sites. She encountered the machines yet again at a site on the Way of Broken Stones, in the vicinity of the Carja settlement Lone Light. She hunted and killed them to gather their CPUs or “hearts” to give to a group of Carja farmers who had been killing Snapmaws for their hearts to pay off a debt. The profusion of Snapmaw chassis in the gorge where they had been conducting their operation had attracted Glinthawks, which constantly attacked Lone Light. The farmers left after Aloy gave them the hearts, which were the last ones they needed to settle their debt.

Finally, Aloy encountered, hunted and killed Snapmaws during her visit to the Banuk region known as The Cut. Unlike the Snapmaws she was familiar with, these were units that had been heavily augmented by HEPHAESTUS, and were known as Daemonic Snapmaws, much more formidable than the Snapmaws she has hunted previously. However she quickly adapted and proved well able to deal with them. She hunted them on two occasions. One was to clear them out from an ancient ruin known as Deep Din during the course of her investigation into its sudden flooding. The second occasion was alongside three Banuk hunters: Urkai, Tatai ,and Tulemak, to help them gather Snapmaw fangs as part of their payment to the Oseram trader Burgrend for the supplies they needed to migrate from The Cut to the Carja Sundom.

Snapmaws are classed as medium-sized machines, but compared to a human they are quite large. A Snapmaw's chassis resembles the body of an enormous crocodile such as the extinct Deinosuchus, with a long, crocodilian snout, a heavyset reptilian body, four crocodilian legs and feet, and a long, stout, powerful tail. Its gait exactly mirrors that of a crocodile. The snout’s upper mandible is long, tapered and toothy, while the lower mandible is actually a chainsaw-like blade with a system of small grinders at its base. There are two optical sensor arrays in the same position as a crocodile's eyes. An armored Blaze canister sits atop each shoulder. The gullet is composed of a sac-like reservoir of Chillwater, called a Freeze Sac. Presumably this is used as a coolant. An array of resource containers that resemble armor plating line its back.[2] Solar panels line its back beside the containers, acting as armor.

Snapmaw sites are scattered throughout the Carja Sundom, from the jungles of The Jewel in the south to the snowy regions in the far north. Daemonic Snapmaws are found in The Cut. Whether Daemonic or not, undisturbed Snapmaws invariably bask lazily in the sun on the bank of lakes, rivers, and other bodies of water. They purify the water and the soil at the bottom by destroying toxins and removing minerals, periodically ejecting them from the pods in the resource containers their backs.[3] Presumably the Snapmaw can use some of its collected resources to manufacture replacement pods in situ, as no Snapmaw has ever been seen to run out of pods.

Like crocodiles, a Snapmaw’s apparent sloth belies the great speed it displays when confronting a perceived threat. Snapmaws employ a ranged attack in which they belch projectiles of Chillwater at an enemy. These are similar to the projectiles hurled by Glinthawks from their beaks and, like them, cause damage, pain and markedly reduced ability to move in human enemies, and will freeze machine enemies such as corrupted or overridden machines provided enough of them hit home. Additionally, they employ melee attacks such as lunging jumps at an enemy, snapping with their jaws, and using their tails as bludgeons. They are also capable of attacking perceived enemies in water, such as swimming humans.

A Snapmaw’s major structural and tactical weakness is its Freeze Sac. Strikes on it from high-powered impact ammunition such as Precision Arrows trigger a corresponding elemental explosion that freezes the machine and disables it's ranged Freeze-based attacks. The Freeze effect of the explosion is powerful enough to overcome a Daemonic Snapmaw’s high resistance to elemental attacks. Additionally, Snapmaws are particularly susceptible to weapons that utilize fire, though the inflicted damage is less with a Daemonic Snapmaw, as is the number of strikes needed to induce a Burn state. 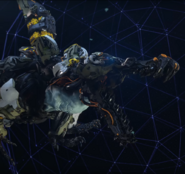 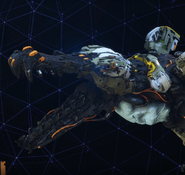