"It crawls like a spider, and carries a container on its back. I wonder what's inside?"
―Aloy, upon sighting a Shell-Walker

The Shell-Walker is a machine in Horizon Zero Dawn. It is a medium-sized Transport Class machine, primarily functioning in the transport of resources gathered and processed by other machines to cauldrons. However, it was weaponized at the onset of the Derangement, and now poses a significant threat to any human who encounters one.

Shell-Walkers were presumably one of the machines originally designed by the Zero Dawn terraforming system’s governing artificial intelligence (AI) GAIA, to be used in the detoxification of the Earth after it was ravaged and left lifeless by the Faro Plague. Originally Shell-Walkers were docile towards humans, fleeing at the sight of humans, as did all terraforming machines. However, after GAIA self-destructed, the AI HEPHAESTUS altered the behavior of Shell-Walkers and all other terraforming machines, making them hostile to humans to the point of attacking them on sight. This phenomenon is what the tribes refer to as the Derangement. Furthermore, HEPHAESTUS weaponized Shell-Walkers, equipping them with electric attacks and a protective energy shield.

A Shell-Walker’s chassis is a hermit crab-like in appearance. It has six stout crab-like legs connected radially to a body primarily composed of a platform upon which it carries a hexagonal cargo container. On the underside of the platform is a power generator. The container is presumably fastened to the platform electromagnetically, and further held in place via structures known as Crate Holders. The head is laterally wide, with a triangular optical sensor array located at each end. Additionally, a Shell-Walker has a pair of limbs that are akin to the chelipeds of a crab. An energy shield generator is on the end on the left limb, and a weapon that fires projectiles of electrical energy, dubbed a Lighting Gun, is at the end of the right limb. A projection carrying a pair of long antennae protrudes vertically from the left side of the head.

Shell-Walkers may be found in groups of a few units at various sites in tribal lands. They mill about, communicating via electronic warbles. They also walk in machine convoys accompanied by Watchers or Longlegs, carrying their cargo to cauldrons. A Shell-Walker’s highest priority is the defense of its cargo. Indeed, the Spurflints Hunting Grounds Keeper advised the Nora huntress Aloy that “Shell-Walkers will defend their cargo with their lives”. If its Crate Holders are destroyed, a Shell-Walker will used its Lightning Gun (if intact) to hold its cargo container in place.

A Shell-walker may be deprived of its energy shield by destroying the generator. Strikes with explosive ammunition such as Blast Bombs or high-damage arrows such as Precision Arrows will destroy the generator. A single strike with a Tearblast Arrow or the Tearblaster will tear the generator off the limb that carries it. If a Tearblast Arrow explodes directly beneath the Shell-Walker’s power generator, it causes a Shock explosion that stuns the machine. 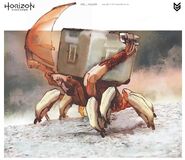 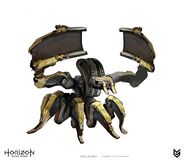 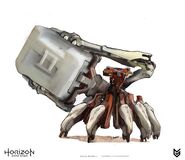 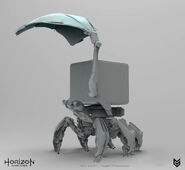 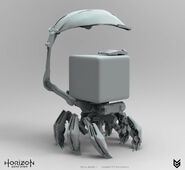