"This one's a new predator. Can see the heat coming off it..."
―Aloy, upon sighting her first Scorcher

The Scorcher is a machine exclusive to The Frozen Wilds. It is a midsize Combat Class machine known to exist only in the Banuk region called The Cut. It bears some similarities to the Ravager, but it is far more powerful, agile and aggressive.[1] This is even more so in its augmented or Daemonic state. Indeed, Daemonic Scorchers are one of the most ferocious and formidable machines known to exist.

Scorchers were created by the artificial intelligence HEPHAESTUS at its now-destroyed R&D cauldron, Cauldron EPSILON, in The Cut. As EPSILON’s creator, HEPHAESTUS had absolute command and control authority over it and the machines it produced, and thus was able to design, field test, and deploy whatever machines it devised at this cauldron without limit. It augmented their armor and resilience to a degree that exceeds that of any known machine outside The Cut. These machines are referred to as Daemonic Machines.

The Nora huntress Aloy encountered a Daemonic Scorcher almost immediately upon entering The Cut, engaging and killing it at the start of the mountain pass leading into the region. The experience starkly demonstrated the superior strength and damage resistance of these machines over any machine she was familiar with up to that time. She saw Scorchers at several sites while in The Cut, culminating in encountering two of them acting as guards in the ancient Firebreak facility, along the path leading to Cauldron EPSILON’s door. Additionally, she engaged and killed two Scorchers in as short a time as possible as part of’ Chieftain’s Trial in The Cut’s Snowchants Hunting Grounds.

The Scorcher’s chassis somewhat resembles that of a Ravager but does not have the Ravager’s tactical vulnerability to fire. Indeed, whereas Ravagers are weak against fire, this element is the Scorcher’s forté. Its head is vulpine, with a long, toothy snout, a split jaw and large ear-like structures. A pair of optical sensor arrays is positioned in the same location as a fox’s eyes. Mounted on its back, between its heavyset shoulders, is a mine launcher. Positioned atop each shoulder is a heavily-armored Blaze canister, and between its haunches is an equally heavily-armored power generator.

Scorchers are found alone or in packs of up to three, either guarding a herd of terraforming machines or in the herd’s immediate vicinity, near enough to hear and immediately respond to their alarm cries on detecting a threat. Their servomotors produce a characteristic heavy, clanking sound, and embers periodically fall like spittle from their mouths, increasing their intimidating appearance. If a perceived threat such as an a human is identified, either by them or a nearby machine, they immediately converge on the position and engage it.

Scorchers attack relentlessly and ferociously with close-range fire attacks or fire-augmented melee attacks. Their unrivaled speed and agility allows them to close the distance between themselves and perceived threats with overwhelming aggression. Indeed, one of their attacks involves using a hidden pair of thrusters to zoom toward the enemy like a rocket. Additionally, they deploy mines from their mine launchers, fired in anticipation of the enemy’s projected position. Unlike the mines of a Stalker, these mines are not proximity mines, and are not scattered as a means of distraction. Instead, they are fired directly at the enemy and its anticipated change of position, and they detonate about a second after they hit the ground. If the Scorcher loses track of the enemy, its large ears are equipped with an auditory detection system that allows it to scan tall grass.[1]

In addition to these abilities, Daemonic Scorchers have considerably tougher armor than normal, and thus are much more resilient. Furthermore, they are immune to the effects of Corruption, cannot be overridden, and have considerably higher Shock resistance. The only way to inflict a Shock state on a Daemonic Scorcher is to detonate the Power Generator on its back. They also take reduced explosive damage from Tripwires.

As a fire-augmented machine, the Scorcher is naturally weak to Freeze attacks. The Power Generator near its rear can be destroyed to temporarily stun the machine, and its mine launcher can be removed and used against it. However, removing either is best done with stealth, as the Scorcher's agility and aggression make it difficult to target its components. 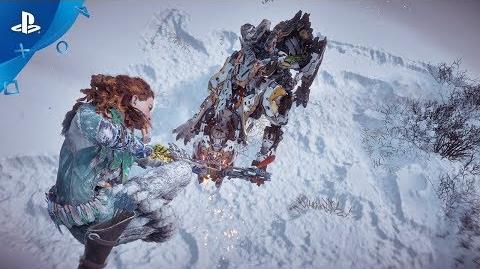 Retrieved from "https://horizon.fandom.com/wiki/Scorcher?oldid=48311"
Community content is available under CC-BY-SA unless otherwise noted.