Over the years leading up to the events of the game, Rukul, Anutai, and Naunuk killed several Carja travelers out of a desire to exact revenge for the Red Raids.

One of the Carja victims was a hunter named Ruwas. As Ruwas was fighting a Banuk hunter named Inatut at the time of his murder, Inatut was framed for the Carja's death, and sentenced to near-certain death atop the Cloud-Shear. Unlike his companions, Rukul was indifferent to Inatut's fate, deeming it as a casualty of war.

Wishing to confirm Inatut's role, the Nora huntress Aloy investigated the scene of the crime, tracking the killers to their base. A battle ensued, with all three Banuk falling to Aloy. Mortally wounded, Rukul confirmed that he was murdering in vengeance of his fallen kin, expressing his disbelief that Aloy followed him for the sake of "that punch-drunk idiot Inatut."

As the horn blew to signal Inatut's exile, Rukul asked Aloy whom the cold would claim first, before succumbing to his wounds. 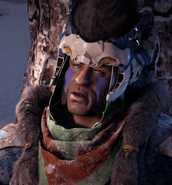