Ruins are the remains of structures built by the Old Ones. They come in two types: Ancient Ruins, which are exposed locations known to the tribes, and ruins, which are well-preserved facilities that the tribes have rarely or never entered. Ruins are riddled with piles of Ancient Debris and often contain rats.

A millennium before the events of Horizon Zero Dawn, the Old Ones had become quite advanced in the construction of machines. By the 2060s, they were used for transportation and entertainment purposes (i.e. Focus devices and advanced aircraft and land vehicles.) However, the environmental situation was at an all time low. These conditions led many manufacturing corporations like Faro Automated Solutions to construct armed machines for peacekeeping purposes. Conditions worsened when the Faro Plague began. Cities were used either as recruiting stations or as collateral damage during Operation: Enduring Victory. At the same time, bunkers were built to help make installations or for the military, as well as for Project Zero Dawn.

Once the Plague wiped out all life on the planet, the cities, now in ruins, went unused and began to rust away. When the new human population left the Cradle facilities, they generally found the cities unnerving or foreboding, and began to build new settlements, leaving the structures to decay.

Perception of Ruins Among the Tribes

The Nora believe that the ruins are spiritually tainted by the sins of the Old Ones, and forbid entry. Anyone who is caught venturing inside (with the exception of Seekers) will be made an outcast for a limited term.

The catalyst for the Carja's creation was Araman's discovery of ancient texts in a ruin. Sunfall, their westernmost settlement, was built atop the ruins of the Zero Dawn Project Facility, Basadid, the Sun-King who ordered Sunfall's construction, believed the facility's location was chosen for strategic value.

In present Carja society, delving is mainly a luxury industry, serving the palates of Carja nobles looking for exotic finds in the ruins.

Ruins are prominent in the Claim, and as a result, played a huge role in the Oseram's development as a tribe. Delvers and scroungers are common occupations among the Oseram, exploring old ruins and salvaging whatever they can find for trade. Usage of salvaged items varies: some choose to convert it to scrap for forging, while others attempt to use it for its intended purpose.

As there are very few ruins in Ban-Ur, the Banuk have a limited interest in them.

Concept art of Aloy in front of the All-Mother 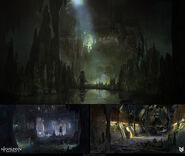 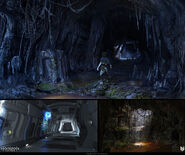 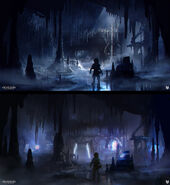 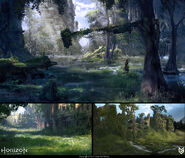 Add a photo to this gallery
Retrieved from "https://horizon.fandom.com/wiki/Ruins?oldid=47627"
Community content is available under CC-BY-SA unless otherwise noted.