View source
watch 02:46
The Quarry - The Loop
Do you like this video?
Play Sound

Beyond the Great Ocean

The Quen are a tribe in Horizon Forbidden West. Hailing from a land across the Pacific Ocean, the Quen are an advanced and powerful empire formed around the discovery of the Focus and the recovery of ancient knowledge.

It can be assumed (albeit with a great deal of confidence) that the Quen’s forebears came from a different Cradle than ELEUTHIA-9, with ELEUTHIA-1 being the most likely candidate.[note 1] Whatever the case, the Quen recovered Focuses in the ruins of their homeland early on in their history, granting them substantial knowledge of the ancient past.

Approximately thirteen generations have passed since the first discovery of the Focuses, which came to be entrusted to a select group named "Diviners". The most important Old Ones were deified by the Quen as "Ancestors", and the retrieval of ancient knowledge (which the Quen dubbed "the Legacy"). In that time, the Quen grew to be a massive empire and regional power.

"This expedition is the most important undertaking of our generation. A quest for knowledge across the gaping sea with nothing less than the fate of our tribe at stake."
―Bohai

As a result of the biosphere’s degradation, the Quen homeland became subject to catastrophic weather, bringing about crop failure, flooding, and drought. At the urging of a relative[note 2], the Emperor ordered the launch of an expedition to the ruins of San Francisco, in hopes that data would be found that could liberate the tribe from their crucible. The Eastern Expedition, which took at least seven years to prepare for, was headed by the Emperor’s relative, who was given the title of “Ceo”.

However, the journey proved more perilous than anticipated. Storms, sickness and starvation claimed dozens of the expedition team before they even reached the city, and their struggles only continued upon making camp. The expedition was able to uncover the location of Thebes, the final resting ground of Ted Faro (whom the Quen revere as “the Renewer”) and The Greenhouse, an FAS biotech facility along the Pacific coast, but the struggles drove the Ceo to madness, turning his fascination with Ted Faro into deluded obsession.

A breakthrough came at the Greenhouse, where a Quen scouting team chanced upon Aloy, a clone of the Ancestor Elisabet Sobeck. While the soldiers at the site mistook her for a "barbarian" and made the fatal mistake of attacking her, Alva, the Diviner on-site, realized her value, and the two worked together to access the ruin's data core, providing the Quen with thousands of agricultural archives. When reinforcements arrived, the Diviner talked them down, convincing them that Aloy was Elisabet Sobeck reborn and allowing her to leave before the rest of the expedition could take her.

Soon after, however, Aloy journeyed to Legacy's Landfall, the expedition's main camp, in search of Thebes.

The Quen are a technologically advanced and powerful empire, with much of their society and culture shaped by the knowledge recovered from the ancient past. They view themselves as having been "chosen", having been entrusted by the Old Ones with the power of the Focus and with it, the ability to access the Legacy.

The Quen appear to have a loose caste system. The tribe is headed by an Emperor, and “Imperials” presumably serve as nobles. Beneath them are commoners, with peasants being the lowest rank. By all indications, Quen society is authoritarian: publicly available information is extensively monitored and controlled by the government, especially regarding the Legacy. The Quen are also known to practice kin punishment, an act of collective punishment (usually execution) for the families of individuals found guilty of certain crimes.[1]

Despite these authoritarian tendencies, social ranks appear to be moderately flexible. It is possible for Quen to obtain higher status than they were born with (as evidenced by Alva), and occupations are not strictly tied to class. Same-sex marriage is also acceptable within the tribe.

"It is the duty of the Quen to seek out the Legacy and defend it from the ignorant and envious."
―Alva

Quen society is tied firmly to the Legacy, the body of recovered ancient knowledge. The Legacy is considered the ultimate truth, and the most important Old Ones are deified by the Quen as "Ancestors".

"...back home, other tribes only mean us harm. And we were told the same was true here."
―Alva

The Quen are nationalist and isolationist, viewing other tribes as ignorant “barbarians” envious of their knowledge. This is informed at least in part by hostility from neighboring tribes.

Quen relations with the observed tribes in the world are effectively nonexistent, although their default attitude of suspicion and aggression carries over to them.

The Quen homeland is across the Pacific, which they refer to as “the Great Ocean”. Aside from mentions of a “Great Delta”, which could refer to any one of several river deltas in Asia, there is little that can be used to pinpoint the exact location of their homeland.

The settlements listed below are part of the Eastern Expedition, and are presumably nothing more than temporary encampments. 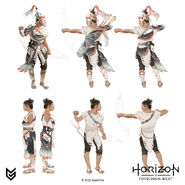