View source
watch 09:34
Legends of Horizon Zero Dawn: The Oseram
Do you like this video?
Play Sound

"The Oseram believe in many things. The forge's hiss, the charcoal's crack, the creak of the fermenting barrel."
―Mournful Namman

The Oseram are a human tribe in Horizon Zero Dawn and Horizon Forbidden West. They are known for their excellent metalworkers and craftsmen, and as such, their steel and powerful weaponry. They are more technologically advanced compared to the other known tribes.

The Oseram are said to be the first tribe to delve into the ruins of the Old Ones, which are plentiful in their homeland.

Due to their loosely defined government, numerous Oseram traveled beyond the Claim for work and settlement: indeed, they can be found in the Sundom, the Sacred Lands, the Cut, and as far as the Forbidden West. Additionally, Oseram work gangs were responsible for the construction of Meridian's elevators.

The Oseram were one of several tribes attacked by the Carja during the Red Raids. Countless among their tribe were either slaughtered or brought to the Sun-Ring to be enslaved and/or sacrificed. Interestingly, there were a number of Oseram, such as the work gang led by Petra Forgewoman, who remained in the Sundom during the war, keeping mobile to avoid kestrels.

To counter the Carja threat, many Oseram banded together to defend their land and their people. Notable warriors included Dervahl, a genius tinker and warlord who eventually lost his family to the raids, Ersa, a fierce warrior who had survived the Sun-Ring and escaped enslavement, and her brother, Erend.

Approximately a decade into the Raids, Avad, the second son of the Mad Sun-King, came to the Claim in hopes of ending his father's brutal reign. Ersa, remembering Avad's role in helping her escape, gathered Freebooters loyal to her and joined Avad's cause. Thus, the Oseram would play a crucial role in the Liberation of Meridian, and the end of the Red Raids.

The Oseram's role in liberating Meridian would not be forgotten. Upon becoming Sun-King, Avad turned his Freebooter allies into the Vanguard, his personal guard and part of Meridian's security. Any remaining Oseram slaves were released, and all Oseram were granted entry into Meridian. While suspicious of the Carja, the ealdormen of the Claim agreed to form an alliance with their southern neighbors. Free trade resulting from this alliance proved mutually beneficial, and many Oseram came to the Sundom for work.

The Oseram are divided into loosely-confederated clans inhabiting the land to the north of the Carja Sundom, known as "the Claim."[1]

The tribe as a whole is made up of independent villages maintained by family clans. These clans are loosely united into a larger nation-state, although the day-to-day lives of Oseram are governed by his or her clan's ealdormen.

Each clan elects a council of ealdormen to provide governance to the tribe, although this is typically done on a case-by-case basis. Oseram citizens with requests for marriage or policy proposals for the village will wait in line for hours each day for an opportunity to pose their question to the ealdormen.[2] Settlements outside of the Claim appear to follow different governing structures.

In many ways, Oseram culture is distinct from other tribes. They do not wear any form of face paint (although some have tattoos), scorn organized religion, and design based on practicality rather than take inspiration from their surroundings.

The Oseram value independence and freedom of expression, making arguments a vital part of Oseram culture. Similarly, honesty is a key virtue, and cheating or deceiving a fellow tribe member is a crime punishable by death.[1]

The Oseram's greatest achievement is their practical craftsmanship, which many members, including Erend, can be heard boasting about. They are the only tribe to forge their own alloys, which they favor over raw machine parts. Forging and metalworking are one of the cornerstones of Oseram culture, with virtually every settlement centering around a forge. Their armors are highly resilient and their weapons are advanced and powerful despite their lack of ancient knowledge, with a particularly notable example being the Oseram Cannon, a key element in Jiran's defeat during the Liberation of Meridian. Other apparatuses, like Sonic Devices, safe doors, and primitive voice recorders are proof of their technological aptitude, which so far can only be surpassed by those bearing knowledge of the Old Ones. According to Ralert, Oseram use all the parts from machines and consider it wasteful to do otherwise.

As evidenced by many Oseram, as well as the Carja scribe Aram, the Oseram are heavy drinkers.[2]

Oseram structures are sturdy in design, comprised of stone and reinforced with lumber and metal. Most of their smaller buildings tend to be circular or cylindrical in shape.

The Oseram believe that the world functions as a large and intricately crafted mechanism, and all the forces of nature are accounted for by this mechanism. They believe that the Old Ones were once the caretakers of this "world-machine", and their civilization fell due to their failure to maintain it.[3]

Aside from this myth, the Oseram are largely irreligious, and scorn the idea of religious bodies. They are generally critical of tribal religions, especially when they interfere with common sense.

"In the Claim, where we come from, we don't own property, we become it."
―Gera

Oseram society is highly patriarchal, with women often being treated like property. Women who wish to become soldiers must shave their heads. Married women will have "Wife" as their title's suffix (ex: Alewife, Forgewife, Bladewife). According to Gera of Hunter's Gathering, this results in strong families, or treacherous bandits.

The patriarchy is stronger in the Claim than in the neighboring Sundom, especially after the recent reforms of Sun-King Avad. Following the Liberation, many Oseram women have left the Claim in hopes of finding independence. Based on evidence within the game, it is customary for Oseram women to wear their hair very short.

Oseram are often seen outside of the Claim, either searching for employment opportunities or resettling entirely. Among the other tribes, the Oseram are known for their rowdiness and frequent disregard for cultural boundaries.

The Carja are the Oseram's southern neighbors, whom they share a long history with. Based on glyphs, the Oseram may have begun trade with the Carja as early as the reign of Sun-King Juwadan.[4] It is likely that the two tribes had cordial relations prior to the start of the Red Raids, as Oseram work gangs played a large role in the construction of Meridian's elevators.

During the Red Raids, the Oseram were hit especially hard by the Carja due to their proximity; however, their technological prowess allowed them to put up a solid fight. While some Oseram, such as Dervahl, hated all Carja for the Raids, others acknowledged that Jiran's actions did not represent all Carja. The allegiance between then-disgraced Prince Avad and Oseram Freebooters was a vital component of the Liberation of Meridian, and the freebooters that marched with Avad became the first members of the Vanguard, which in time became not only a crucial part of Meridian, but a symbol of unity between the two tribes.

Oseram tend to criticize Carja culture for its opulence, and are suspicious of the Sundom igniting war with them again. On the other hand, many Oseram, particularly women, have immigrated to the Sundom due to the comparatively greater freedom, forming a considerable minority. The Ealdormen in the Claim seem the least receptive of the alliance, owing largely to the resulting emigration and the potential influence of Carja culture (particularly in regards to women). Additionally, some Oseram, most notably Dervahl, hold a grudge against the Carja for the Red Raids, which nearly led to the conflict restarting.

While the alliance between the two tribes is uneasy at best, it is nevertheless the strongest inter-tribal relationship seen in the known world.

While not antagonistic, the relationship between the Banuk and Oseram is far from cordial. The differences between their two cultures, especially their spirituality, is a large factor. Oseram merchants traveled to the Cut in an attempt to engage in trade with the Banuk, with limited success.

While interactions between the Nora and Oseram are limited, the Oseram display a basic knowledge of Nora customs. Some Oseram, most notably Gera, have come to Hunter's Gathering following the Red Raids, engaging in trade with the Nora tribe for the first time in either of their histories.

However, there are indications that the Oseram, like the Carja, view the Nora as primitive: several Oseram have referred to the Nora as "savages". 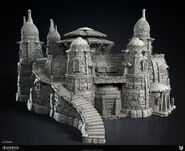