"Meridian is the center of the world. Everyone comes here eventually."
―Carja Noble

Meridian, also referred to as the City of the Sun, is one of the three major human cities in Horizon Zero Dawn, along with Sunfall and Mother's Heart, and the capital of the Carja. Founded by the first Sun-King Araman in the shadow of the Spire atop which perched Glinthawks they had followed from the 'Savage East', Meridian grew into a large city at the heart of the Carja Sundom.[1]

Meridian was founded by the first Sun-King, Araman, after the people that became the Carja were driven out of their homeland. They wandered for an unknown amount of time, following the Sun and the Glinthawks. Along the way, many Carja died, Araman's own family among them. In spite of persecution and outright violence from other tribes, the Carja continued until Araman experienced a vision of what came to be known as the Spire. The Carja came to settle on the mesa surrounding the great tower, building the capital city of Meridian - named from a passage in the Leaves of the Old Ones - from the abundant local resources. As the city grew, the people prospered, and traders arrived from foreign lands.

The Reign of Jiran

The reign of the thirteenth Sun-King, Jiran, was a time of great turmoil for Meridian. In response to the phenomenon known as the Derangement, Jiran began ordering human sacrifices in the Sun-King in an attempt to appease the machines. When sacrificing slaves failed, Jiran escalated to The Red Raids culminated in Jiran's twenty-first year. Upon the execution of his older brother Kadaman for questioning his father's demands for sacrifices, Prince Avad fled the city along with those soldiers loyal to him. He and his men crossed into Oseram territory, and thanks to his personal friendship with Ersa, were able to negotiate an alliance with the tribe.

Months later, and with an army of Oseram warriors and mercenaries, Avad marched on the capital. He hoped that his status as rightful heir to the throne would spark an uprising among the Carja and thus avoid large-scale death and destruction. His plan worked, as many Carja warriors retreated, surrendered, or even defected. However, the defenders of Meridian stood firm, and Avad was forced to order the use of Oseram cannons to decimate the outer walls.

This began followed by a three-pronged assault; one group attacked the main gate, one scaled the walls nearest the temple, and another infiltrated the city through the irrigation tunnels. As Jiran's slave pits were opened, Itamen, Nasadi, Helis, Bahavas, and many of his loyal followers used the chaos to flee the city with whatever they could carry; they would go on to become the Shadow Carja. Avad personally confronted his father, hoping to convince him to surrender and avoid further loss of life. However, Jiran refused to answer for his crimes, and Avad reluctantly slew his father.

After executing his father, Avad succeeded him as Sun-King. He quickly ended the Red Raids and brought about sweeping reforms, including the end of slave labor. Balahn would note that Meridian had become far more alive than it had been during the reign of Jiran. Due to their assistance in the Liberation, the Oseram were allowed into the city, and quickly became a common sight (and, thanks to their tendency to argue, a common sound). The Oseram that aided Avad during the Liberation were given the title of "Avad's champions" and were named the Vanguard. With almost all of Jiran's loyalists defected, the power vaccuum was quickly filled by those loyal to Avad, ensuring a relatively peaceful transition. The Sun-Ring was repurposed into a memorial for the victims of the Red Raids.

About two years after the Liberation, the infamous Oseram Dervahl began a plot to destroy Meridian and kill Avad. After faking the death of Captain Ersa, Dervahl placed a bomb within a warehouse at the edge of the mesa. Finding a way into the Palace of the Sun, Dervahl planned to force Avad to watch as he burned Meridian to the ground. However, Dervahl's plot was foiled by the Nora Aloy, and he was taken into custody.

Battle of the Alight

The final battle brought great destruction to the city and was the worst battle that Meridian ever faced. Despite their preparations, the Carja were not prepared for the machines that would come. The Eclipse machines arrived from the west and were initially held off by the Oseram Cannons placed at the gate, but they got through the gates after Aloy was knocked out when they blew the wall up, dragging HADES in with them. The Eclipse destroyed the Royal Maizelands and Meridian Village as they passed through to get to the Spire, which was HADES' goal. Two of Meridian's elevators would be destroyed during the fighting from Deathbringer fire.

The corrupted machines set the whole lower city on fire and the destruction was immense, the state of the area being obvious once Aloy was woken up by Teb. Aloy made her way up to the Spire and found that HADES was already transmitting a signal to awaken buried Faro machines. She destroyed the Deathbringer protecting it and defeated HADES using the master override she obtained during her exploring of the GAIA Prime facility. Aloy was greeted with cheers from the whole city as she stepped out, showing that HADES was no more.

Following the Battle of the Alight, Sun-King Avad ordered repairs to the damage caused by the battle. It is unclear how much work remains six months after the battle, although the Alight's condition would suggest it is still underway.

In the hear of the city a hunter's lodge can be found for elite, big-game hunters. Aloy must prove that she is worthy before gaining entrance. Once in, she can work her way up the lodge's hierarchy.

Palace of the Sun

This large palace accessible by bridge from the city is home to the ruling Sun-King.

Temple of the Sun

Connected to the Sun-Ring, the Temple overlooks the Spire. It is the center of the Carja Sun-Faith.

Concept art for the elevators 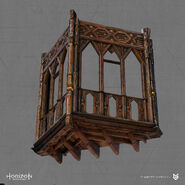 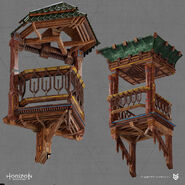 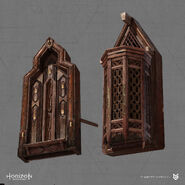 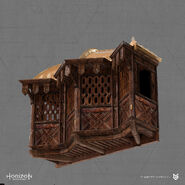 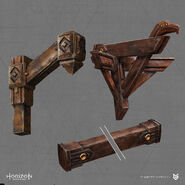 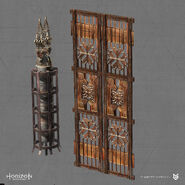 Meridian as seen in Forbidden West

Meridian in flames during the Eclipse invasion.