Palace of the Sun

Marad, also called Blameless Marad, is a minor character in Horizon Zero Dawn. He is a senior official in the court of the Carja Sun-King Avad.

Marad serves His Radiance Avad, 14th in the Line of Luminance, as his chief advisor and spymaster. A crucial part of his duty is the maintenance of an intelligence service with agents all over the Carja Sundom, and at least one in the territory of the Shadow Carja, a hostile power. Since intelligence is a crucial part of security, he also has a working relationship with the captain of Avad’s Vanguard and with the Carja military.

Before Avad, Marad served his father, His Radiance Jiran, 13th in the Line of Luminance. He knew that Jiran’s cruelty and hostility toward all other tribes, epitomized by the Red Raids, would lead to the Carja tribe’s destruction. In a conversation with the Nora huntress Aloy, he insinuated that he therefore assisted Avad's overthrow of Jiran by deliberately and carefully helping to ensure his efforts were successful. The exact nature of his assistance is unknown.

He first met Aloy at the Sun-King’s Palace in Meridian after she investigated the death of Ersa, captain of the Vanguard. Accompanied by Ersa’s brother, the vanguardsman Erend, Aloy had discovered that the circumstances surrounding Ersa’s death were false. Ersa had apparently been ambushed and killed by the Shadow Carja. However, Aloy and Erend discovered that the actual perpetrators were members of the Oseram tribe. While the Oseram were Carja allies, the alliance was an uneasy one, and there were rogue Oseram who were very hostile to the Carja. Marad was present when Aloy and Erend spoke to Avad about their findings, and suggested that the rogue Oseram most likely responsible was the warlord Dervahl. Dervahl had a pathological hatred of Avad, Ersa, the Carja and all Oseram who allied with them, and had the means and skills to engineer such an ambush and deception. The trail of Dervahl’s whereabouts led to the Oseram freehold Pitchcliff. Marad told Aloy and Erend that he had an agent there with information as to Dervahl’s exact whereabouts.

The agent’s information proved accurate, and led to Dervahl’s Camp. Aloy and Erend led a force of the vanguard in storming the camp, where they found a dying Ersa. She warned them that Dervahl was planning a devastating terrorist attack on Meridian, and Aloy found evidence of the nature of the attack at the camp: a massive Blaze bomb. The Blaze was being stockpiled at a warehouse in Meridian. On their return, Aloy and Erend reported the events and information to Avad. Marad, on hearing about the stockpile, suggested a likely location that his intelligence agents knew of in the city. This proved to be the correct location. Aloy and Erend found the bomb and neutralized it. However, the wily Dervahl had already infiltrated the palace with his men and incapacitated Avad, Erend and Marad, intending to force them, especially Avad, to watch as he destroyed the city. However Aloy followed his path into the palace and ultimately defeated him, saving their lives.

Later, during the impending attack on Meridian by the Shadow Carja cult known as the Eclipse, Marad received the contingents from the alliance of tribes that Aloy had assembled in defense of the city. At the successful conclusion of the battle, he and Avad cheered victoriously, along with the Carja soldiers present. As the city celebrated their victory that night, Marad stood at Avad's side quietly offering observations of those in attendance.

Marad is extremely shrewd, adept at analyzing intelligence from his agents and coalescing it into accurate conclusions. One attribute that is key to his skill in this regard is how he considers gathered intelligence and forms conclusions. He considers all intelligence and conclusions in terms of likelihood or probability, never certainty. Thus he dispassionately judges all intelligence and conclusions instead of merely selecting the ones that seem correct. For example, he accurately pinned Dervahl as being the most likely perpetrator of Ersa’s kidnapping and framing of the Shadow Carja, even though others were sure he was dead, lack of evidence of his death notwithstanding. This is because it was extremely unlikely that anyone else but Dervahl had the cleverness to engineer such a ruse, the knowledge and skill to build the weapon used to incapacitate her and her men, and the motive to harm her.

Additionally, he is apparently also very adept at subterfuge, as he was able to engineer the success of The Liberation, aiding Avad from inside Jiran’s court, without Jiran, his champion Helis, or anyone else even slightly suspecting. With regard to his personal life, he is evasive, never offering answers to personal questions beyond cryptic responses. However, despite his shadowy nature, he is genuinely dedicated to the Sundom’s security and strongly supports Avad, considering his fair and just rule to be key to the survival and advancement of the Carja people. 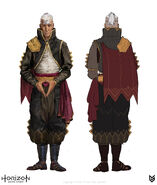 Model render
Add a photo to this gallery
Retrieved from "https://horizon.fandom.com/wiki/Marad?oldid=46964"
Community content is available under CC-BY-SA unless otherwise noted.