"As for me, I always wanted to be a snow-ghost. Free to do what I will."
―Ikrie

Ikrie is a minor character in Horizon Zero Dawn: The Frozen Wilds.

Ikrie grew up in Banuk territory, alongside her closest friend Mailen. Having never known her parents, Ikrie taught herself how to hunt. Mailen aspired to join the White Teeth, a prestigious werak who valued survival above all else, even by Banuk standards.

Ikrie never cared about joining the White Teeth but went with Mailen simply to remain close to her friend, and both entered into an ordeal that prospective members of the White Teeth must endure: spend four days and nights alone on a remote glacier and survive alone. Ikrie succeeded, however, Mailen broke her leg and was unable to complete the challenge. Ikrie attempted to help her, but she refused every attempt at aid.

Ikrie is quite similar to Aloy; she is restless, headstrong and compassionate, and puts the good of others above tradition. However unlike Aloy, Ikrie did not grow up being shunned by her tribe and grew up with friends, which made her question the Banuk values of survival over helping others, putting her at odds with the White Teeth werak. Ikrie's inability to get past this ideological difference led her to abandon not only the White Teeth, but possibly her entire culture.

Ikrie remained in the vicinity trying to get close enough to help Mailen after she was injured; however she was set upon by Daemonic machines who surrounded her. She fought them fiercely before she was joined by a Nora traveler named Aloy. After dispatching the machines, Aloy told Ikrie that she had volunteered to look for her and Mailen due to her disgust at the werak being so willing to allow them to die. Ikrie accepted Aloy's offer of help and the two set off to Mailen's last known location. The pair found her unconscious and surrounded by a pack of daemonic machines. Ikrie and Aloy fought them off before tending to Mailen, who initially stubbornly refused; however, she accepted after Aloy berated her for putting her pride over her well-being. After being treated, Mailen hobbled off to rejoin the White Teeth. When Ikrie told her that she never cared about joining the White Teeth, Mailen wordlessly brushed her off and continued on. Ikrie realized she had no place in a werak that would put tradition over the well being of its members. She asked Aloy to tell the Chieftain that she died, saying she would remain long enough to scream out her grief, letting the ice keep it.

Following the completion of the White Teeth trial, Ikrie made her way to the Snowchants Hunting Grounds, where she later met Aloy again. Aloy told Ikrie that she had done as she was asked and told the werak she was dead. Ikrie admitted she had always like the idea of being a "snow-ghost," free to do as she wanted. She offered Aloy a challenge: to take down machines using limited resources together. Aloy accepted the challenge and the pair were able to complete it. Ikrie lamented that she would likely always fight as though she were watching someone's back, whether they were there or not. Aloy complimented her by saying that she would probably be great on her own. Ikrie wished Aloy luck with her journey, and the two parted ways. 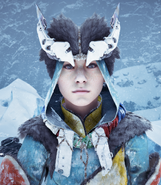