View source
watch 08:00
Legends of Horizon Zero Dawn: The Hunters Lodge
Do you like this video?
Play Sound

Hunting for the Lodge

"The Lodge is not just its members, and not just its House in Meridian: it is the spirit of the hunt, a code to be honored, an ideal to be lived."
―Bylaws of the Lodge

The Hunters Lodge is a Carja organization dedicated to the art of machine hunting. The Lodge is headquartered in a grand house located in Meridian, where hunters can submit proof of their hunts and mingle with other hunters. The Lodge also maintains multiple Hunting Grounds throughout and around the Sundom, where hunters undertake timed trials to test their skills and earn prizes. The organization's governing rules are laid out in the Bylaws of the Lodge.

There are two classes of membership within the Lodge, each with specific requirements:

The Hunters Lodge was founded by the 10th Sun-King, the Radiant Nahasis, who was an avid hunter. He arranged a hunting competition for men from Carja noble Houses and declared those who defeated the most dangerous machines to be the first Sunhawk and Hawks of the Hunters Lodge.[2] In the fourth year of Sun-King Marzid's reign, the Hunters Lodge used the spoils from a massive Grazer hunt to fund the construction of the Lodge's final wing.

During the reign of the Mad Sun-King Jiran, 13th Luminance of the Radiant Line, many members of the Hunters Lodge were brutally killed in a massacre in Meridian's Sun-Ring.

For decades, the Hunters Lodge retained its status as an organization preserved solely for Carja men of noble background and was unwelcoming to women and tribal outsiders. This changed during the reign of the 14th Sun-King Avad, who ordered the Lodge to open its doors to individuals beyond Carja men of pure blood.

Past Members and Affiliates: 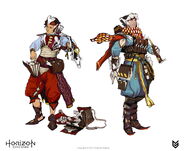