"Grazers, busy filling up the canisters on their backs."
―Aloy

The Grazer is a machine in Horizon Zero Dawn. It is a small, deer-like Acquisition Class machine whose primary function is the production of Blaze from grass.[1] Herds of Grazers are commonly found throughout the various tribes’ territories.

Grazers were designed by the artificial intelligence GAIA as one of the categories of Zero Dawn terraforming machines designed to detoxify the earth as the first step in the reestablishment of life after its eradication by the Faro Plague. Originally Grazers were docile, posing no threat to humans.

However humans began to hunt terraforming machines for parts and resources. Grazers appear to have been extensively hunted. Indeed, the hunter Farukawas of the Carja tribe, a Sunhawk of the Carja Hunters Lodge, is recorded to have hunted and killed a herd of Grazers so vast that it covered an entire valley floor. The garnered bounty of resources was so large that the entire Lodge membership was needed to carry it back to the Lodge.[2]

Because of human predations on Grazers and other terraforming machines, and presumably because of particularly huge predations such as Farukawas’ hunt, HEPHAESTUS, the artificial intelligence that manufactured and managed the machines, altered the behavior of Grazers and other terraforming machines from docility to increasing hostility, in a phenomenon the tribes refer to as the Derangement.

A Grazer is cervid in overall appearance. It has a long neck with a pair of metallic antler-like structures atop its head, each composed of a long, angled base tipped with a set of four rotor blades.

The Grazer uses these to cut grass which they then consume and convert into Blaze.[1] A single optical sensor array composed of one sensor is located at the tip of the snout. Four blaze canisters are located on its back. Grazers are quadrupedal, with legs similar to those of a Watcher, though longer. White armor plating partially covers the synthetic muscle that comprises the bulk of the chassis, on the underside of the neck, the back, the shoulders and the hips. A Grazer's chassis is similar in appearance to that of a Lancehorn.

Grazers are invariably found in herds. With heads down they work, busily cutting and converting grass into Blaze, stopping only to quietly change to another spot. For protection against hunters, they are usually accompanied by recon machines such as Watchers or Longlegs, frequently in tandem with combat machines such as Sawtooths or Ravagers. Grazers are skittish; if a perceived threat is identified, Grazers emit a loud, shrill, rapid warble before fleeing. However, if the threat is very close, the closest Grazers will attack rather than flee.

Grazers use the rotor blades on their antlers as offensive weapons, charging and using them in gouging attacks. They also employ kick attacks using their forelegs and hind legs. 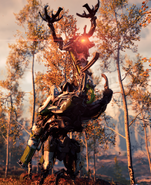