Gildun grew up in the Claim, the son of two delvers. While he did not join his parents in their delves until he was older, they would often bring back items they had salvaged from the ruins. One time, his mother brought back an ancient "looking glass" (a mirror), an experience that he would remember fondly. As Gildun grew older, he would follow in his parents' footsteps.

While delving into the ruins of Greycatch, Gildun thought he noticed a mirror in one of the storage rooms. In his efforts to enter the storage room, he accidentally damaged the control mechanism for the floodgates, causing the facility to flood.

Gildun ventured further into the facility in hopes of fixing his mistake. Unfortunately, the rusting bridge inside began to collapse under his weight. In panic, Gildun retreated back, abandoning a ring to the door's locking mechanism, which he had taken with him, to the waves. However, the door had closed behind him, trapping him inside.

Gildun was found/rescued by Aloy, who had come to the ruin investigating the sudden flooding of Deep Din. Gildun explained the events that led to the present moment, and convinced Aloy that the storage room would contain the parts needed to fix the mechanism.

Gildun led Aloy to two sluice gates, which would lower the water level enough to locate the ring. Having deduced that each gate required two people to operate, he and Aloy worked together to lower them, reducing the flooding enough to locate the ring, allowing them to access the storage room. Much to Gildun's disappointment, the mirror had been nothing more than a trick of light. However, he managed to brush it off. After replacing the control mechanism's power cell, Aloy gave Gildun the honor of reactivating the control mechanism.

Ultimately, Gildun chose to stay in the Cut for a while longer.

Gildun is an energetic and good-natured man, albeit somewhat bumbling and careless. He is incredibly talkative, often regaling his stories of delves and his family to anyone who will listen (and many who won't). Gildun considers the joy of delving to be the adventure that comes with it, rather than the bounties at the end. However, beneath his exuberant exterior, Gildun is acutely lonely, having no companions save for his parents and Aloy. His friendship with Aloy may be the only one he has, and as such values it highly. 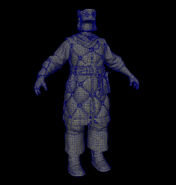 Model render
Add a photo to this gallery
Retrieved from "https://horizon.fandom.com/wiki/Gildun?oldid=48129"
Community content is available under CC-BY-SA unless otherwise noted.