The Fireclaw is a machine exclusive to The Frozen Wilds. Like its twin machine the Frostclaw, this huge, ursine machine is classed as an Acquisition machine despite that being its secondary function. Their main purpose is being hunter-killer units for deployment against humans.

They are the first and so far only known machines specifically developed for this purpose, a task that they are exceptionally well-equipped to perform. As such, they represent an escalation in their creator HEPHAESTUS' hostility to humans and its efforts to dissuade humans from hunting machines.

Fireclaws were created by the AI HEPHAESTUS at Cauldron EPSILON, in the Banuk region known as The Cut. Given that the Frostclaw is similar in appearance and design, they may have served as an inspiration or prototype for Fireclaw design. As previously outlined, Fireclaws are the first and only known anti-human hunter-killer machines. Apparently satisfied with their capabilities and suitability for this purpose, HEPHAESTUS began preparations to mass-produce thousands of them. However, it was only able to produce and release a small number of them before EPSILON’s destruction.

A Daemonic Fireclaw was used by HEPHAESTUS as the primary defense of the cauldron’s core against an expedition that infiltrated the cauldron. The expedition, composed of the Nora huntress Aloy, the Banuk shaman Ourea, and the erstwhile Banuk chieftain Aratak, prompted HEPHAESTUS to deploy the Fireclaw when Aloy attempted to access the core. The machine proved extremely effective against the three expert hunters. In addition to its highly formidable combat abilities, HEPHAESTUS spontaneously generated Control Towers to repair any damage the Fireclaw sustained mid-battle. While the party ultimately prevailed against it, their incursion was too late to prevent HEPHAESTUS from releasing the aforementioned small number of Fireclaws from the Cauldron into The Cut. Due to the extreme danger that they posed to the region’s residents, Aloy hunted and destroyed five of them, engaging two in tandem with Aratak. While Fireclaws are still present in the Cut, only one or two can now be found in the region, both at remote sites. This significantly reduces the threat they pose.

Like the Frostclaw, the Fireclaw is somewhat ursine in appearance, movement, and locomotion. Its chassis resembles the body and has the gait of a grizzly bear. Presumably, HEPHAESTUS modeled the Fireclaw and Frostclaw after the long-extinct animal, which was native to the region during the time of the Old Ones. When bipedal, its size is comparable to that of a Thunderjaw, making it one of the largest machines. The head ends in a pointed, toothy snout with a three-mandible jaw containing a system of rollers. A pair of optical sensor arrays is located in the same position as a bear’s eyes would be. Mounted on each forelimb are a pair of gear-like wheels. There is an armor-protected fire generation unit, known as a Fire Unit, on its chest, and power cells are located on its lower back. Fire Sacs, armored storage tanks containing Blaze, are built into its chassis, similar to Fire Bellowbacks. However, while the Fire Bellowback’s tanks are prominently placed on its back and throat, the Fireclaw’s tanks are seamlessly built into its shoulders and are much more damage resistant. Furthermore, while the Fire Bellowback and Freeze Bellowback are identical in all respects except for their respective elements of Fire and Freeze, Fireclaws are much larger than Frostclaws, have a considerably higher capacity to resist and sustain damage, and their armor is much tougher.[2]

Like most large machines, Fireclaws are solitary and almost never seen in groups. They are only known to be found in The Cut; the region’s geography prevents them from entering nearby territories, such as the Nora Sacred Lands to the south.

As previously stated, Fireclaws have a secondary purpose as acquisition machines, and are classified as such. They can be frequently seen mining soil for mineral resources at their respective sites, in the same manner as Tramplers. They also scavenge destroyed machines, like Scrappers or Glinthawks.

Like the grizzly bear, the Fireclaw is able to adopt both a quadrupedal and bipedal stance. In either stance it employs fast, relentless and deadly fire-based range attacks and fire-augmented melee attacks. Its capacity to sustain damage is rivaled only by four other known machines. Its damage resistance is even greater than that of these machines, particularly against explosives.[2] Even if one of its flammable liquid tanks is punctured and explodes, the blast damage is minimal. Furthermore, Daemonic Fireclaws share the immunity of all Daemonic Machines to Corruption and Override, as well as a high resistance to Shock. If they are put into a Freeze state, they can melt themselves free by creating a cloud of fire around themselves, provided that their Fire Unit is intact. Additionally, they are quite agile in spite of their size, able to run and jump with surprising speed. If given the opportunity, they can also rip off ropes attached to them from theRopecaster if they haven't been fully tied down.

The Fireclaw can switch between Quadrupedal and Bipedal stances, each with different sets of unique melee and ranged attacks. The Quadrupedal stance is the default posture when roaming around undisturbed, with enhanced agility and traversal options to spring up lower cliffs and leap over gaps to chase Aloy across the environment. During combat, it will typically adopt this four-legged posture when far away, and make use of the improved mobility to close the distance. Most of its attacks while in this stance are melee-focused, repositioning itself with quick tumble-dodges to keep up the pressure, but it can also use two long-ranged terrestrial attacks of small clustered lava-spewing geysers or a single volcano which shoots out burning rocks in a radius.

The Bipedal stance severely limits the Fireclaw's mobility but adds enough ranged attacks to compensate for this drawback. The Fireclaw tends to adopt this upright two-legged posture at close to mid-range, aggressively chaining together multiple claw slashes in a row and weaponizing the Fire Unit mounted on its torso to spew out streams of burning flames. If Aloy is out of reach from the Fireclaw's close-range attacks, it can scrape at the ground with its wrist-mounted grinders to lob molten chunks of solidified dirt and rock in her direction or launch itself in the air and come crashing down back-first at Aloy's position to crush her under its massive weight.

Once its maximum health has dropped to the 60% mark or below, the Fireclaw gains the ability to tear out a large circular slab of rock from the ground as a makeshift shield against incoming projectiles or bludgeon weapon. It's still possible to damage exposed limbs and potentially induce a Stagger state that forces it to drop the rock. There are three follow-up attacks that the Fireclaw tends to perform while it's currently holding a Rock Shield at different ranges: an advancing charge to close the gap, a descending overhead slam at close-range and a long-distance hurling throw. The rock deals Fire damage and generates lingering Fire Patches upon impact, which can be permanently disabled by destroying the Fireclaw's Fire Unit.

After sustaining enough damage, the Fireclaw ignites its chassis and generates a fiery aura around itself which damages upon contact and negates severity buildup or currently applied status effects. This frenzied state is automatically triggered once the Fireclaw's total health reaches 70% of its maximum value and then again at 25%. Destroying the Fire Unit permanently deactivates this special attack.

As a fire-based machine, Fireclaws are naturally susceptible to Freeze attacks. However, their damage resistance renders subsequent attacks in this state much less effective than on other machines, and their size makes inflicting a Freeze state on it a lengthy process; even high-powered Freeze weapons, such as the Icerail, take several seconds to do so. Destroying the Fire Sacs located on its shoulders disables the fire augmentation of melee attacks, and destroying the Fire Unit located on its chest disables the ranged terrestrial attacks, exploding and inflicting a temporary Burn state, but this state causes minimal damage and quickly dissipates. Provided both Fire Sacs and Fire Unit have been destroyed, a permanent Burn state will be inflicted on the Fireclaw, eventually killing it. However the machine’s tough armor plating makes this difficult, and its high capacity to sustain damage endures a lengthy period of time elapses before it is destroyed.

The power cells located on its upper and lower back have little protective armor, and can be overloaded via Shock Arrows, triggering an electrical explosion that stuns the machine; indeed this is the only possible way to electrically stun a Daemonic Fireclaw.

A Fireclaw "wiping its nose"
Add a photo to this gallery 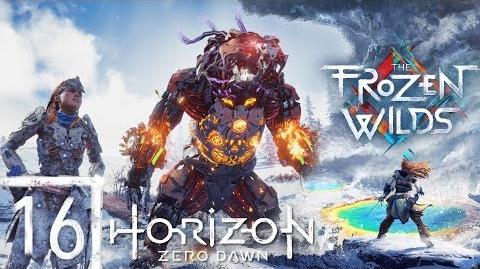 Retrieved from "https://horizon.fandom.com/wiki/Fireclaw?oldid=48159"
Community content is available under CC-BY-SA unless otherwise noted.