"It looks like that machine carries fluid in those sacs. Not sure I want to find out what kind."
―Aloy, upon sighting a Fire Bellowback

The Fire Bellowback is a machine in Horizon Zero Dawn. It is a dinosaur-like medium-sized machine of the Transport Class. It is one of a pair of “twin” machines; the other machine in the pair being the Freeze Bellowback.

Presumably, Fire Bellowbacks functioned to clear away large tracts of land by burning as part of Zero Dawn terraforming operations, as well as transporting large amounts of Blaze, presumably to cauldrons as fuel. However, HEPHAESTUS, in response to human machine-hunting, altered the default programming of Zero Dawn machines, including Fire Bellowbacks, to a state of hostility against any human they encountered, in a phenomenon known as the Derangement.

Aloy first encountered Fire Bellowbacks in the northern regions of the Nora Sacred Land, frequently together with their twin machines the Freeze Bellowbacks. She also encountered them in the Carja Sundom, specifically the area south of the Carja capital Meridian. She encountered their more formidable Daemonic states in the Banuk region known as The Cut. Additionally, she engaged one during one of the trials in the Valleymeet Hunting Grounds. Finally, she hunted one to acquire a part to upgrade a flamethrower-like weapon she acquired in The Cut known as a Forgefire.

The Fire Bellowback’s chassis bears a vague similarity to a theropod dinosaur, particularly Spinosaurus or Baryonyx. Two long, sturdy hind legs with three-toed feet, similar to those of a theropod, are attached to its torso. The torso is primarily composed of a large cargo sac carrying Blaze, and an array of four smaller tanks longitudinally located at its gullet. Just beneath the cargo sac is a long tail, at the base of which are two antennae. Three Blaze canisters are located at the base of the tail between the legs. The sac and tanks are semi-armored and made of a tough, transparent material that can withstand multiple arrow strikes before rupturing. A crest-like array of armor plates is located on its upper back. This protects the sac from frontal attacks. The head is primarily composed of a long, armor-plated snout. The Fire Bellowback has no mouth; instead, the snout ends in an opening akin to a spray nozzle. A pair of optical sensor arrays is located near the base of the head, on either side. Although classified as a medium-sized machine, the Fire Bellowback is actually larger than the Behemoth, which is classified as a large-sized machine.

Fire Bellowbacks usually are found in pairs or groups of three, frequently together with Freeze Bellowbacks. Undisturbed, they mill about their sites, emitting low, gurgling growls, their heavy footfalls reverberating. They are heavy and strong enough knock over large trees in their way. Upon encountering a perceived threat such as a human, they emit a loud, angry shriek.

The Fire Bellowback is essentially an enormous flamethrower. Most of its attacks revolve around its ability to release a high-pressure stream of ignited Blaze from its nozzle. It can spray this stream directly at an enemy, or around on the ground in a circular pattern to engulf an enemy in a wide, flaming arc. At long range, it can fire balls of ignited Blaze in a trajectory at an enemy. Additionally, it is capable of rushing at an an enemy in melee attacks, the speed of which belie their large size and normally plodding gait.

A Fire Bellowback’s cargo sac and gullet tanks are its main tactical weaknesses. Multiple arrow strikes will rupture them, causing a large Fire explosion and inflicting severe damage on the machine and any machine, animal or human in the blast radius. This also deprives the Fire Bellowback of all its Fire-based attacks. 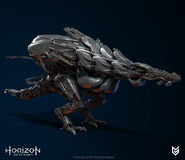 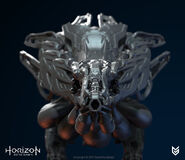