"All forces must combine, all halves of nature joined to one cause: Shadow to Sun, Night to Day. Even a Buried Shadow wants the wheel to turn. For without a Sun in the sky, there can be no shadow."
―Helis

The Eclipse is a non-tribal faction in Horizon Zero Dawn. It is a secret militaristic cult in service to the rogue artificial intelligence HADES. Before its defeat, its members believed HADES to be the supernatural Devil of the Carja religion known as the Buried Shadow. This was a deliberate deception by HADES on the advice of its servant, the maverick wanderer Sylens. HADES used the Eclipse in a plot to reactivate the Faro Plague in order to eradicate all life. However an alliance of warriors assembled by the Nora huntress Aloy defeated the Eclipse and halted HADES’ plan.

The Eclipse is composed of loyal Sun-Priests and Kestrels of the late Carja Sun-King Jiran. They have a fanatical devotion to the Carja religion and an unassailable belief in the infallibility of the Sun-King. They consider Jiran’s cruelty to be firm rule approved by the Carja deity, the Sun.[1] These loyalists fled the Carja capital Meridian upon Jiran’s supplantation by his middle son Avad, who deposed Jiran to end his reign of terror. The cult sought to retake the Carja Sundom in Jiran’s name from Avad, believing this to be the will of the Sun. They served HADES because, posing as the Buried Shadow, it promised and provided them the military strength to do so.

His Radiance Jiran, 13th in the Line of Luminance, ruled the Carja Sundom with cruelty. He was fanatically aided and abetted by his Sun-Priests and Kestrels, particularly his champion, the Kestrel commander Helis. As the Derangement made the machines more and more hostile, Jiran decided that human sacrifice was necessary to end the Derangement. He had his army, including Helis and the Kestrels, conduct raids on other tribes for victims. This began what is referred to by the tribes as the Red Raids.[2][3]

Revulsed by his father’s brutal reign and the massive bloodshed, his middle son Avad was spurred to action by Jiran’s execution of Avad’s older brother Kadaman for objecting to the raids. Avad fled Meridian with like-minded members of the Carja army. In exile, he formed an alliance with warriors from the Oseram tribe to depose Jiran by force. The army succeeded, and Avad killed Jiran, having no choice but to do so. Before his death, Jiran ordered Helis to lead the other loyalists both military and civilian, out of the Sundom to his summer palace at Sunfall. Helis and the High Priest Bahavas established them as a Carja splinter tribe called the Shadow Carja.

Helis and Bahavas were the two most senior of the Jiran loyalists. They were bent on someday leading a Shadow Carja army to overthrow and execute Avad and retake the Sundom. However they both knew that their relatively small military force could not defeat the Carja army. Their intention thus remained a pipe dream. Then a mysterious stranger contacted them: Sylens. He offered to introduce them to one who had the power to make their pipe dream a reality.

Accepting his offer, the two men went to the agreed meeting place: the remains of an FAS-BOR7 Horus in whose still-functional computer core HADES had taken refuge. There they met HADES. The AI presented itself to the two men as the Buried Shadow of Carja lore. HADES promised to give them the power to retake Meridian if they would serve it.[4] The deception worked; the two men agreed and formed the Eclipse on HADES’ instruction. This was essential to its ultimate plan; with this militarized cult at its disposal, HADES would have an army with which it could gain control of the Sundom. Control of the Sundom meant control of the Spire, one of a global network of Zero Dawn transmission broadcast towers. It intended to use this tower to broadcast a signal that would reactivate the Faro Plague.

Helis oversaw the establishment of the Eclipse’s main base of operations around HADES’ location, a very remote and nearly inaccessible area deep in the jungles of The Jewel. Bahavas returned to Sunfall to govern the Shadow Carja, and Helis became the cult’s leader. Meanwhile Sylens developed a Focus network for cult commanders to communicate with HADES and each other. Finally, to bolster the cult’s military strength far beyond what the Carja army could withstand, HADES had the cult find and exhume several of the Faro Plague’s Scarab and Khopesh robots, which it reactivated. These were known by the tribes as Corruptors and Deathbringers respectively. Upon completion of the Focus network Sylens had developed, HADES decided he had outlived his usefulness and transmitted an order to Helis to detain and kill him. However, Sylens had secretly built a backdoor into the network to stealthily monitor communications. He thus heard the order and escaped.

The Eclipse continued to conduct its recovery of Faro Plague robots in preparation for its assault on Meridian. Then a day came when HADES ordered the cult to immediately assemble at a set of coordinates in the Nora Sacred Land and launch an attack with the intention of killing one specific young Nora woman; Aloy. She had been seen by HADES through the Focus of an Eclipse-coerced spy named Olin. HADES, on beholding her physical appearance, immediately knew her to be a clone of the ancient scientist Elisabet Sobeck, who had overseen the development and implementation of Zero Dawn. As such, she was able to use the system’s master override to purge HADES. The fact that she wore a Focus meant that she knew about Old One technology and thus could do so. Thus HADES ordered the Eclipse to kill her, to prevent her from ever finding the override.

The Eclipse attacked the tribe’s Proving ritual and succeeded in killing many Nora, but Aloy survived and killed the attackers, allowing the survivors to escape. Helis and another contingent arrived however, and Helis attacked Aloy and slit her throat. With HADES’ order seemingly carried out, Helis and the remaining Eclipse cultists withdrew.

However, Aloy survived. Connecting her Focus to that of an Eclipse commander she had killed, she learned that she was the target of the attack, and that the killers had seen her through Olin’s Focus. Anointed a Seeker on behalf of the tribe, she set out to find Olin in Meridian, interrogate him about the Eclipse and the attempt on her life, and then track down the cult itself. Early in her journey she encountered and helped the tribe’s war-chief Sona to find and eliminate the temporary base the Eclipse had set up in the far north of the Nora Sacred Land, killing all the cultists present.

In Meridian, Aloy discovered Olin’s whereabouts at one of the cult’s Corruptor recovery operations. After killing the cultists and Corruptors, Aloy interrogated Olin and learned about the Eclipse; their name, their leader Helis and their exhumation of the Faro Plague robots. She also heard about HADES for the first time, though Olin could give her no information about the AI other than its terrifying voice; the voice of the demon he believed it to be. He pointed her to where she could get more information: the Old Ones ruin known as Maker’s End. Furthermore, Sylens contacted Aloy over her Focus and offered to help her as part of solving the larger mystery that he was bent on unraveling: what happened to the Old Ones.

Aloy resolutely dogged the Eclipse, following and foiling their recovery operations at Maker’s End, The Grave-Hoard and the Zero Dawn Project Facility. Sylens provided her with valuable information about the Eclipse and HADES, but did not tell her he was directly involved in the cult’s founding. This included directions on infiltrating the Eclipse main base and crashing their Focus network, which Aloy accomplished. However this mission alerted HADES and the Eclipse that she was alive. Thus when a disturbance alerted the Eclipse of activity at the Zero Dawn Project Facility, which was directly beneath Sunfall, they knew she was there, and were ready for her. They waylaid and captured her, with Helis attempting to sacrifice her in the Shadow Carja Sun-Ring. However Aloy defeated the machines he loosed upon her, and Sylens rescued her in a friendly extraction.

Upon being rescued, Aloy urgently returned to the Nora Sacred Land; in retaliation for her repeated interference, Helis had ordered the Eclipse to launch a full genocidal attack on the Nora. They attacked without mercy, almost exterminating the tribe and devastating the Sacred Lands. However, Aloy arrived and led a last stand counter-offensive that defeated the Eclipse. Afterward, at the ruins of GAIA Prime, Aloy acquired Zero Dawn’s master override to use against HADES, and Sylens fully revealed his culpability to Aloy in the founding of the Eclipse. The two of them deduced HADES’ intention to use the cult to gain control of the Spire so it could reactivate the Faro Plague. Aloy went to Meridian and warned Avad. Using her by-then very high standing and respect among the Carja, the Nora and the Oseram, she was able to forge an alliance of warriors from the three tribes to stand against the Eclipse.

Some time after, HADES made its move. It ordered the Eclipse to begin the attack on Meridian. In a battle that wrought great damage, the cult, bolstered by its reactivated Faro Plague robots invaded the city, bringing HADES in its computer core to where it could interface with the Spire.

However the attack was ultimately foiled. Aloy and the alliance prevailed. Aloy herself killed Helis, and as the defenders battled the Eclipse, she made her way to the Alight, the Spire’s courtyard. There she overcame HADES’ best attempts to defend itself using Faro Plague robots, and used the master override to purge HADES, defeating it and ending its plot to reactivate the Faro Plague. Upon its purging, Sylens secretly downloaded HADES and took it prisoner. HADES and the Eclipse were defeated.

With its leader Helis dead, most of its membership killed by Aloy in various encounters and in the battle for Meridian, and HADES defeated by Aloy and imprisoned by Sylens, it may be presumed that the Eclipse is permanently broken and no longer a threat. It remains to be seen if it is able to recover.

** Encountered during The City of the Sun and Collateral.

Insignia seen outside a dig site 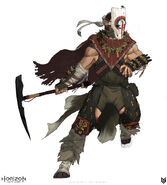 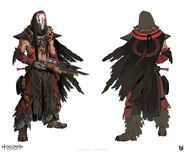 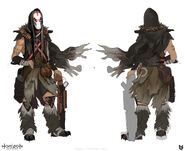 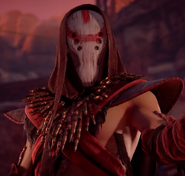