Anthony Howell (voice)
Dervahl is a renegade Oseram warlord and the tertiary antagonist in Horizon Zero Dawn. A former leader in his tribe’s fight against the Carja during the Red Raids, Dervahl was transformed into a genocidal warlord by the death of his wife and child in the Sun-Ring. Losing all sense of balanced justice, he plotted the destruction of the Carja capital Meridian, the death of the Carja monarch Sun-King Avad, and the extermination of the Carja tribe. He was defeated by the Nora huntress Aloy.

Nothing is known about Dervahl’s early life, other than that as an adult he was married and had a daughter.

When the Derangement grew worse, the despotic Carja Sun-King Jiran instituted the practice of human sacrifice in a deluded effort to end the phenomenon. To this end, he had the Carja military raid other tribes for victims, including the Oseram. These became known as the Red Raids. Dervahl was the leader of one of several groups of freebooters who fought in defense of the tribe against the Carja. Apparently he and his group were particularly effective, because Jiran specifically retaliated against him by having his wife and child captured and sacrificed in the Sun-Ring.

Enemy of His Own Tribe

Jiran’s de facto murder of Dervahl’s wife and child started Dervahl’s own personal Derangement. He became consumed with revenge against Jiran. Over time, this devolved into genocidal hatred of the Carja. When fellow resistance leaders Erend and his sister Ersa realized what he had become, they withdrew from him. They ultimately joined with Jiran’s middle son Avad in an alliance that deposed Jiran. Avad himself killed Jiran when Jiran left him with no choice but to do so. This earned him specific hatred from Dervahl, as Dervahl blamed him for robbing him of his vengeance against Jiran. Consequentially, he also hated Erend and Ersa for joining with Avad. Moreover, he had become enamored of Ersa, and therefore hated her for rejecting him. This was intensified by his perception of a developing relationship between Ersa and Avad. His hatred grew until he rejected his own tribe, presumably for commencing a post-Liberation alliance with the Carja. He also thus presumably began attacks on them, to the point where he was sentenced to death in absentia by the tribe’s ealdormen and actively hunted.[1]

After two years of planning and evading capture, Dervahl finally instituted a plan by which he intended to execute his vendetta against his three major perceived targets: Ersa, Avad and the Carja tribe. After assembling a group of like-minded Oseram to assist him, he devised and executed an elaborate ruse by which he captured Ersa and her vanguard unit at an ancient ruin known as Dimmed Bones. He utilized the sonic weapons he had developed, which paralyzed the targets without bloodshed. Since no Carja, Shadow Carja or Oseram outside his group had any knowledge about such weapons, he was easily able to capture them and then arrange the scene to frame the Shadow Carja for her ambush and death, with no trace of his involvement. As he intended, the plan ultimately resulted in Erend and Avad believing that the Shadow Carja had captured and killed Ersa at another location. Meanwhile, he took her to his camp and tortured her. As for Avad and Meridian, he utilized contacts in Meridian to assemble a very large store of Blaze in a storehouse in a part of the city.[2] This area was calculated to cause catastrophic damage and loss of life should the Blaze explode. He then secretly entered the city and converted the store into a bomb, further rigging it with an explosive booby trap should it be discovered and tampered with. He then intended to infiltrate the palace with his men, use sonic weapons to capture and incapacitate Avad and his guard, and then detonate the bomb via remote control while forcing Avad to watch.

His plan to capture Ersa was executed successfully. However his plan to frame the Shadow Carja for waylaying and killing her, and then to execute his terrorist attack against Meridian, were both foiled by Aloy. Upon request by Erend to investigate, Aloy went to the supposed ambush site. Using her Focus-enhanced perception and tracking skills, and her natural aptitude for Holmesian deductive reasoning, Aloy discovered the site was false and tracked the trail to the actual site at Dimmed Bones. Here she found evidence of the sonic weapons Dervahl had used. Unlike any other known person except Sylens, Aloy had the scientific knowledge to understand what she was seeing. She returned to Meridian and informed Avad. Avad’s spymaster Marad had Dervahl's trail tracked to the Oseram freehold Pitchcliff. Here, Aloy and Erend discovered the location of Dervahl’s camp. After killing Dervahl’s cohorts who guarded the camp, they found Ersa. Though they were too late to prevent her from dying from the injuries she sustained from Dervahl’s torture, she warned them of Dervahl’s malevolent intention toward Meridian, and Aloy found evidence of his intended terrorist attack on the city.

Meanwhile, Dervahl had again secretly entered the city. Again, he believed that his cunning and technological advantages would lead to his success. However, as with his plan to frame the Shadow Carja for Ersa’s death, Aloy’s abilities and skills led to his defeat; furthermore, this time they also finally led to his capture. He and his men set up his bomb and earmarked a path into the palace, all the way to the throne area, that bypassed the guards. However Aloy and Erend returned and reported to Avad all that they had found, including evidence of Dervahl’s plan against Meridian. Marad gave them a lead by which they found the bomb and neutralized it, unknown to Dervahl, who had already infiltrated the palace with his men. After Aloy and Erend left, they struck, incapacitating Avad, Erend and Marad with sonic weapons.

As Avad lay convulsed with pain, Dervahl venomously informed him of his vengeance-driven intent to destroy Meridian and then kill him. He became furious when he tried to detonate the bomb and discovered that it had been neutralized. He and his men went to another area of Avad’s court for a closer look at where the bomb should have exploded, leaving the way clear for Aloy. Using her tracking ability, she had discovered and followed their path into the palace. Finding Avad, Marad and Erend, she disabled the sonic weapon that incapacitated them. Aloy then confronted Dervahl. Disparaging her and promising to kill Avad after killing her, he engaged her, trying to incapacitate her with a portable version of his sonic weapon. Aloy killed his accompanying men, and then incapacitated him instead, with her combat skills. However he had one final backup plan: a Machine Lure. He used it to summon a flock of Glinthawks against her. They were no match for a huntress of Aloy’s unparalleled skill; she killed them all.

Defeated, Dervahl remained defiant until he was knocked insensible by Erend. He was arrested and imprisoned in one of the old cells beneath the former Sun-Ring that had been used to hold intended victims, thence to be transported to the Oseram capital Mainspring in chains. Avad and Erend informed Aloy that the execution that awaited him would be very unpleasant. Though Dervahl maintained an air of bravado, he himself was well aware of this.

"Dervahl is a brilliant man. I wonder what he would have accomplished if it weren't for my father's cruelty."
―Sun-King Avad discussing Dervahl with Aloy

Dervahl was originally a loving husband, father, and respected leader among the Oseram before and during the Red Raids. However, Jiran’s slaughter of his wife and child made him bitter, callous and genocidal, driven to exterminate the Carja regardless of the fact that the contemporary Carja generation had nothing to do with the Red Raids. Indeed, those who were responsible were dead, were now part of the Shadow Carja, or had been expelled from the Carja military by Avad. Not only did he hold all Carja responsible for the slaughter of his family, he also hated any Oseram who allied with the Carja and Avad to depose Jiran, instead of joining him in his crusade to kill Jiran and exterminate the Carja. Furthermore, he was willing to detonate a bomb that would have killed large numbers of Meridian’s residents, including non-Carja; many of these people were themselves victims who had lost their families in the Sun-Ring, just as he had.

Dervahl is a talented inventor. One area of special interest to him seems to be acoustics, as much of his work involved the development of sonic devices, at first for entertainment, and then as weapons. He is known to have re-invented the phonograph, a sound recording and reproduction device that the Old Ones would have considered ancient. He first used it to record the voices of his wife and child. Aloy found the device and recording at his camp years after the fact. Additionally, he also maintained a workshop high in the snowy mountains to the northeast of Pitchcliff. Here he apparently found, studied and became familiar with Machine Lures. He is also very cunning, as demonstrated by his devising a plot that had the Carja fully convinced that the Shadow Carja had killed Ersa, his gathering and assemblage of materials for a very powerful bomb in Meridian without alerting the Carja security services, and evading concerted Oseram efforts to capture him for two years. 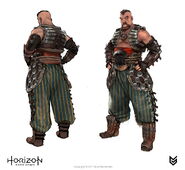