"Hel-LO!"
―Aloy, upon picking up a Deathbringer Gun

Deathbringer Guns are dropped by Heavy-type Eclipse cultists, but can also be torn from Deathbringers themselves. Using weapons that deal tear damage will remove these weapons, dropping it and allowing it to be used by Aloy.

Fired from the hip, belt-fed, and dealing 80 damage per shot, this weapon comes with a 60-round magazine and fires large-caliber bullets. If one hits the right spots, this gun can kill an entire Eclipse squad before the magazine is spent and the gun has to be dropped, as it cannot be reloaded.

Deathbringer guns are normally mounted on the Deathbringers, ancient war machines made centuries before Aloy was born. However, the Eclipse cult put them to good use. Upon finding a Deathbringer that cannot be brought back online, the guns are detached and used as heavy assault weapons.

The Deathbringer gun first enters the stage carried by an Eclipse Cultist leader who leads a devastating attack on the Proving ceremony. Upon seeing the remaining Nora Braves putting up a good fight, killing many of his fighters, the leader leaves for a moment and returns with the gun. He uses it to mow down several braves, including Bast and Vala, before Aloy takes him out. Aloy can then use the gun herself to quickly kill the rest of the cultists.

From then on, the Deathbringer gun can be picked up from heavy Eclipse fighters or shot off of Deathbringers. 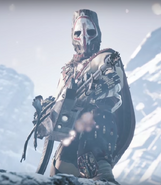 The Eclipse Cultist Leader wielding a Deathbringer Gun
Retrieved from "https://horizon.fandom.com/wiki/Deathbringer_Gun?oldid=48434"
Community content is available under CC-BY-SA unless otherwise noted.