Horizon Wiki
Register
Don't have an account?
Sign In
Advertisement
in: Pages in need of verification, Activities, Cauldrons
English

View source
watch 03:54
Lore Bites Cauldrons (Identical or Unique)
Do you like this video?
Play Sound

"There's a reason the Matriarchs forbid those places - and not just because they're dangerous. We weren't meant to see what's inside."
―Dral

A Cauldron is an underground facility where machines are built. By overriding these, Aloy unlocks the ability to control new machines. In Horizon Zero Dawn there are four major Cauldron activities, plus a fifth in Horizon Zero Dawn: The Frozen Wilds.

Project Zero Dawn envisioned a series of underground facilities to rebuild a lifeless Earth. These facilities would be controlled by GAIA while the subfunction HEPHAESTUS would oversee construction of Cauldrons where specialized machines would be designed and constructed for use in terraforming.

The inhabitants of the New World are aware of the cauldrons, and some have deduced that they are where machines are built. A few have attempted to venture inside and discover its mysteries, although only one has been successful.

The entrances to cauldrons always feature a triangular structure, sometimes guarded by a very bright energy barrier. The interior consists of dimly-lit hallways made up of thick cable-like material, and very large chambers with several elevated, dark-colored platforms, connected by a series of bridges that can only be crossed by overriding a nearby port. The interior is also littered with black and white pyramid-shaped supply crates and medicinal fungi. Entrances between different chambers also feature a triangular structure. Countless drones and magnetic rails carry resources between different parts of the cauldron. Paths between different chambers sometimes open into natural caverns.

At the very back of each cauldron is a core situated lower than the ground level. This room features several control towers and triangular doors, likely opening into machine-manufacturing areas. The core itself is pillar-like and retracts into a hole in the ground, guarded by a dome-shaped energy barrier, itself surrounded by two crane-like structures that protrude from the ceiling. Cauldrons also feature recycling rooms with giant melting pots, where machine parts are melted down to be reused. One particular cauldron, RHO, features a Blaze processing chamber with a giant mechanical 'heart' that pumps Blaze through 'veins' to locations unknown.

There are five cauldrons visited in Horizon Zero Dawn. A sixth, Cauldron PSI, is known to exist, although its location remains unknown.

An unknown Cauldron is seen in the third issue of the Horizon Zero Dawn comic series. Although its interior is unseen, it is evidently capable of producing black-armored Clawstriders. 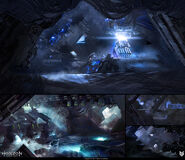 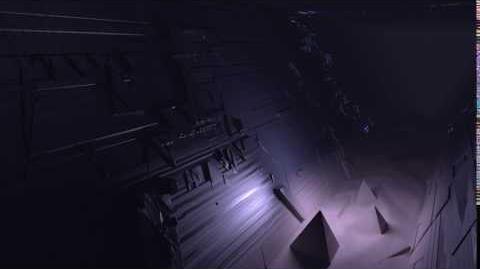 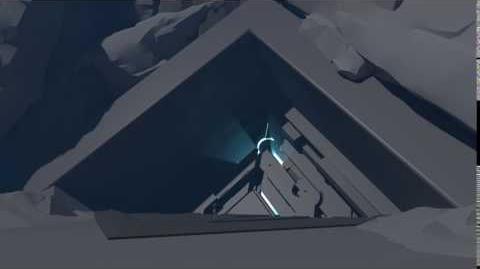 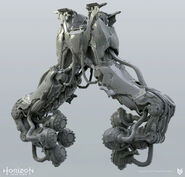 The Thunderjaw in Cauldron ZETA

The entrance of the ZETA cauldron.
Español
Community content is available under CC-BY-SA unless otherwise noted.
Advertisement