View source
watch 02:46
The Quarry - The Loop
Do you like this video?
Play Sound

"That machine looks like it could carry a mountain. Or smash its way through one."
―Aloy, upon sighting a Behemoth

The Behemoth is a machine in Horizon Zero Dawn and Horizon Forbidden West. It is a large Transport Class machine, inarguably the largest and most powerful known machine of this class. Its primary purpose is the collection of resources from smaller Acquisition Class machines and the transport of these resources to cauldrons for machine manufacture. It collects these resources using its anti-gravity technology. With the onset of the Derangement, this technology is used by the machine for lethal attacks on any human it encounters.

Behemoths were originally designed by the Zero Dawn terraforming system’s governing artificial intelligence (AI) GAIA, and built by GAIA’s machine-manufacturing subordinate function HEPHAESTUS. Presumably, they served a function similar to their present one in the restoration of Earth after it was left lifeless and sterile by the Faro Plague. However, upon GAIA’s self-destruction, HEPHAESTUS successfully took control of at least four of Zero Dawn’s cauldrons, including the one that manufactures Behemoths, Cauldron XI. Hostile to humans for hunting machines, it made all of these cauldrons’ machines, including Behemoths, hostile to humans as a method of protecting the terraforming system.

Behemoths were a favorite machine of Sun-King Jiran to use in blood sacrifice as appeasement to the Sun in his deluded effort to end the Derangement. The victims were herded into an arena known as the Sun-Ring, and Behemoths and other machines were loosed in the arena to kill them, while hundreds of spectators watched. Carja who condemned the slaughter were also captured and thrown into the Sun Ring. This included a number of Hawks of the Carja Hunters Lodge. However, being very experienced hunters, they survived every wave of machines, until two Behemoths were consecutively let loose, finally killing them. Even so, the Hawks managed to kill them both before they were overcome.

The Nora hunter Aloy engaged and killed Behemoths on multiple occasions. On one occasion, Behemoths were deliberately used as weapons. The Oseram murderer Rasgrund used a machine lure to summon two Behemoths to the Carja prison Sunstone Rock, from which he had escaped, to destroy the prison and kill its warden Janeva. Aloy happened upon the attack, and killed the Behemoths. On another occasion, she helped two Oseram hunters, Beladga and Jorgriz, acquire Behemoth cables for use as cannon fuses by waylaying and killing a convoy of three Behemoths and accompanying Shell-Walkers.

The third occasion harkens back to the use of Behemoths by Jiran for human sacrifice. This time, it was Aloy who was the intended victim. She was ambushed, captured and thrown unarmed into the Sun Ring at the Shadow Carja capital Sunfall with a Behemoth, by her most dangerous human enemy, the Eclipse leader Helis. Helis used Corruptors to corrupt the Behemoth, increasing its power and aggressiveness, and then had it loosed to kill her. However Aloy turned the machine’s strength to her advantage by goading it into knocking down support pillars that held up a platform on which her weapons lay. Reacquiring her weapons, she then killed the Behemoth before being rescued in a friendly extraction by the wandering maverick researcher Sylens.

Finally, Aloy encountered a Daemonic Behemoth in the Banuk region known as The Cut. HEPHAESTUS deployed it as a guard in the ancient Firebreak facility located in the region, along the path leading to the door of its R&D cauldron, Cauldron EPSILON. Aloy and the other two members of an expedition to the cauldron encountered the machine as they proceeded through the facility to the cauldron door, along with several other Daemonic machines.

The Behemoth’s huge chassis has some resemblance to the body of a rhinoceros. Its head is mostly composed of a very large pyramidal snout. Its jaws consist of a pair of mandibles similar to those of a Thunderjaw, An optical sensor array is located on each side of the snout, near the mandibles. Between the mandibles is a pair of rotary tools whose primary purpose is unknown, but which it can use in attacks. On each side of its very large neck are three anti-gravity generators called force loaders. Its belly has a large longitudinal circular space into which a circular cargo container fits vertically, locked in place by clamps. Between its haunches is an antenna array, and on each haunch is a Chillwater canister. On the back of it's neck sits a single power cell.

Behemoths are almost exclusively found walking in convoys consisting of one Behemoth and two Longlegs. The only known Behemoth site is located to the far north of Meridian in the Carja Sundom, along the route that leads to the Old Ones ruin known as Maker’s End. Here three Behemoths mill about, along with two Longlegs. It may be surmised that the Behemoths seen in convoys come from that site, and left to go on resource transport convoys between cauldrons. This task occupies them constantly, and hence they do not return.

A Behemoth’s most potent attacks stem from its anti-gravity ability. It can manipulate gravity to employ extremely powerful rock-hurling melee attacks. Additionally it can use its weight and physical power to generate very damaging seismic shockwaves, and hurl rock shrapnel from its mouth using the rotary tools mounted in it. Its most basic attack is a charge that inflicts severe damage due to sheer momentum. This momentum is due to the machine’s huge mass and the velocity of its charge; Behemoths normally ambulate with a slow, plodding gait, but are capable of running with surprising speed when necessary.

A Behemoth relies on its force loaders for its anti-gravity attacks. Their destruction or removal via pneumatic concussion weapons such as the Tearblaster or ammunition such as Tearblast Arrows therefore disables these attacks. Strikes on its Chillwater canisters with Freeze Arrows cause a damaging Freeze elemental explosion and induces a Freeze state, which makes the Behemoth much more susceptible to damage. Striking the power cell with a Shock Arrow releases a shock elemental explosion, and stuns the machine.

Concept art, based on an image of a rhinoceros 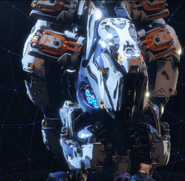 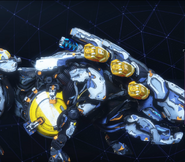 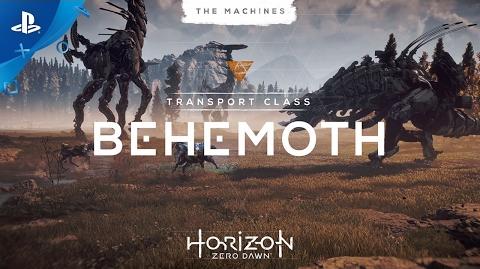