Bast was a member of the Nora tribe and minor antagonist in Horizon Zero Dawn. He was killed by the Eclipse Cultists during the Proving.

In his early years, Bast did not display any hostile intentions towards Aloy. His confusion toward Aloy was evident when one of the Nora tribe mothers shepherded the children away, explicitly telling them that Aloy was an outcast and was to be shunned. Presumably, Bast developed hostile behavior towards Aloy after this incident.

Subsequently, he made his dislike towards Aloy clear, calling her a "No-Mother" and scarring her forehead with a rock.

Aloy and Bast met again in the Proving at Mother's Heart, Bast clearly showed his dislike towards Aloy again, calling the rock incident a "treasured memory". Vala, another participant in the Proving, berated Bast and told him to cut it out. He taunted Aloy for "trying to dress like a Nora", and told her that she did not belong in the Proving.

During the Proving, after Aloy acquired the Grazer trophy, Bast shot it out of her hands and breaks it, causing Aloy to need to hunt for another one and temporarily putting her in last place.

When the Proving ended, he finished in second place tied with Vala. He overreacted to seeing the "motherless outcast" win and vainly told the proctor that Aloy cheated. Suddenly, a group of killers sabotaged the Proving. Under heavy fire, he agreed to help Vala and Aloy, and held off the Eclipse long enough for a few of the other candidates to escape. When he saw Vala killed by a Deathbringer Gun, he recklessly tried to run to her side, only to meet the same fate seconds later.

Bast and Vala would be remembered by the survivors of the massacre as heroes.

Bast was shown to be devout in the traditions of the Nora, including the shunning of outcasts. He had a callous and arrogant attitude, especially towards outcasts; he had no qualms about sabotaging Aloy during the Proving and lying in an attempt to stop her from winning. His bigotry may stem from devotion to the Nora faith, as he was shown as a child to only hate Aloy after being told that outcasts were to be shunned.

Despite his overall unlikable demeanor, Bast proved in his final minutes of life to possess courage and honor, fighting against the Eclipse long enough to save the lives of the other surviving candidates. 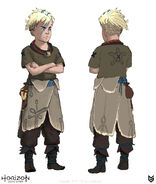 Concept art for Bast as a child, by Luc de Haan

Model render
Add a photo to this gallery
Retrieved from "https://horizon.fandom.com/wiki/Bast?oldid=48035"
Community content is available under CC-BY-SA unless otherwise noted.