"Anyone but a bandit clan would pull back now."
―Petra Forgewoman

Bandits are humans who, usually having been cast out of their tribes, are living a nomadic life. They are as much an enemy to hunters as machines, though they are far less resilient.[1]

Bandits can be found in small groups all across the map, often near campfires or along designated roads and gorges. There are several Bandit Camps on the map where many bandits have gathered and fortified the area, creating a base that can be cleared out as an activity. The seven main Bandit Camps are:

Bandits are hostile to all other parties. They will ambush and attack Aloy and other friendly tribes, as well as engage any machines. This can benefit the player greatly, as both parties end up being weakened, allowing for easy kills and looting. Bandits utilize many of same types of weaponry that most other humans use, such as bows and melee weapons. Some bandits can be seen carrying a special heavy weapon known as the Firespitter. 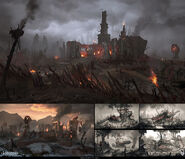 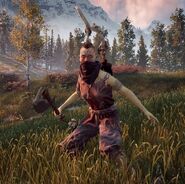 A bandit encountered in the Sacred Lands 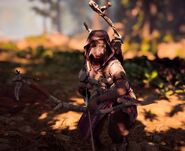 A bandit encountered in the Sundom