View source
watch 02:58
No Man's Sky Update - The Loop
Do you like this video?
Play Sound

"This isn't a cave - it's a ruin."
―Aloy, discovering the Bunker

Ancient Armory is a side quest in Horizon Zero Dawn.

Tucked into the Sacred Lands of the Nora is a long-forgotten bunker of the Old Ones that contains a curious set of armor sealed away behind locked Ancient Doors. To gain access, Aloy must collect five Power Cells located throughout the world.

This quest will be activated either the first time Aloy comes across one of the Power Cells during the main quest or when she visits the Bunker, depending on which happens first.

One Power Cell is found in the underground facility that Aloy fell into as a child. This location can be revisited at any time during the game. Return to the ruins near Mother's Watch and make your way through them. Eventually you will come to a locked door that must be pried open with your spear. Beyond that there will be another doorway which is blocked by stalactites. Simply smash these with your spear and you will find the Power Cell on a table at the back of the room.

The second Power Cell is in All-Mother Mountain. After the Proving quest, you will end up here at the beginning of the main quest, The Womb of the Mountain. Instead of following Teersa to the left, go straight out of the room where you get your equipment back until you find a locked red door. Look to the left, crawl down a tunnel lit with candles, and you will find the Cell in the room at the end. If this Cell is not obtained during the Womb of the Mountain quest, it will not be accessible again until the main quest, The Heart of the Nora. The gate to Mother's Watch will be closed and All-Mother cannot be entered until then. Note that the fifth and final cell cannot be obtained until the quest after The Heart of the Nora in any case, so this makes little difference overall.

The third cell is in the Maker's End ruin, which you will visit as part of the Maker's End main quest. Climb all the way to the very top of the ruins to Ted Faro's office. Once there, instead of following the quest objective and examining the data storage system, turn around and find the yellow handholds leading up the ruined sky scraper. Follow these all the way to the top and find the Power Cell there. Use the rappel point to return to Ted Faro's office and continue the quest.

The fourth cell is in the Grave-Hoard, where you will go to as part of the Grave-Hoard main storyline quest. Once you have restored power to the Ancient Door and gone through it, look around until you spot a telltale green diamond, indicating the hidden Power Cell. You will need to pass this cell in order to get to the next part of the facility, so it is perhaps the most difficult one to miss.

The final Power Cell requires the quest The Mountain That Fell. Go to GAIA Prime. Instead of rappelling down, go to the left of the rappel point and carefully move to the edge of the cliff. There are hidden handholds leading up to a hidden-in-plain-sight area where you will find a purple-lit hallway. The Power Cell sits on a shelf to the right at the very back.

Take your five Power Cells back and slide two into the vacant slots. Now you have to solve a puzzle where you have to rotate each of the five holograms into a certain position. A display to the right will show five 24-hour codes in military time. Imagine each hologram as a clock and turn them to their respective position. The first door is open, and on the right of the new room, you will find five more holographic locks. Use the last three Power Cells, and this time, a panel on the left will show angle measurements (90 degrees, 270 degrees, etc). Again, just turn the locks to these positions (from left to right) right, left, up, right, left. Now the final barrier is down and you can just walk in and claim it. 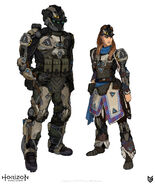