The Heart of the Nora
The Womb of the Mountain
All-Mother Mountain is an unmarked location in Horizon Zero Dawn. It is a sacred mountain located inside the Nora settlement Mother's Watch. The mountain embodies the Nora deity called All-Mother.

Normally locked off to all Nora except the Matriarchs, the entrance to All-Mother Mountain is protected by a wood palisade encirclement. After entering the mountain, a wide ramp slopes downward, flanked by ceremonial candles. To the right is a small doorway that leads to hallway. This hallway branches into multiple small rooms.

At the end of the ramp is a sizable landing, to the left of which is what is worshiped as the physical embodiment of All-Mother herself; a large Old Ones bunker door about 20 foot in circumference, built into the rock wall of the cave. A circular pedestal in front of the door serves as a platform upon which entrance to the cradle facility is requested. A bright blue light shines onto the landing once the bunker door is opened.

It was from this door that, to the Nora, it seemed Aloy was birthed. After being birthed in an artificial womb, Aloy was placed by one of the facility's servitor robots (under the direction of the AI GAIA) on the entrance pedestal in front of the door, to be found by the tribespeople inhabiting the area.

A synthetic voice emanates from the bunker door when approached, as with most other Old Ones' bunker doors. This voice reinforces the Nora's belief that there is a spirit within the mountain that protects the tribe's people.

The bunker door houses ELEUTHIA-9, a GAIA cradle facility and a part of Project Zero Dawn.

About 700 years prior to the events of the game, the ancestors of the Nora tribe, and possibly other tribes, were released from the ELEUTHIA-9 facility (as well as presumably from other ELEUTHIA cradle facilities) through the bunker door. These ancestors were not educated beyond a kindergarten level due to the sabotage of the APOLLO sub-function of GAIA. This lack of knowledge is what led to the formation of tribal societies, especially the Nora.

As the centuries passed, the bunker door that the ancestors were released from became part of an elaborate myth to the Nora tribe. This myth made the bunker door and the mountain surrounding it out to be a protective deity called All-Mother. This deity, according to Nora myth, defeated the Metal Devil, actually a Titan-class Horus machine and part of the Faro Swarm that at one point assaulted the mountain in an effort to destroy the cradle facility within. The Horus lays dormant atop All-Mother, and its long-reaching metal tentacles can be seen piercing the ceiling of the cave in front of the bunker door. 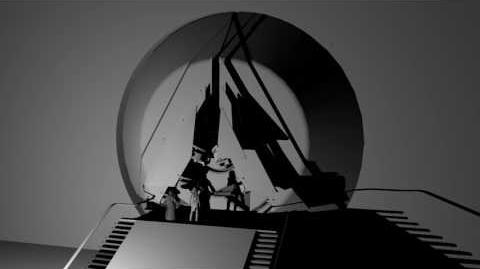 Concept art of Aloy in front of the All-Mother, by Erik van Helvoirt

Add a photo to this gallery

Retrieved from "https://horizon.fandom.com/wiki/All-Mother_Mountain?oldid=40506"
Community content is available under CC-BY-SA unless otherwise noted.